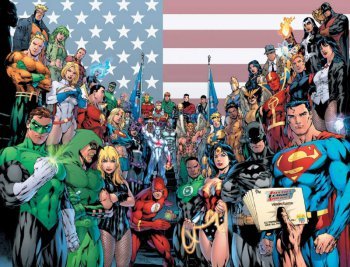 If you are a villain, you are probably crapping your pants right now.
"The League leads. When there is a Crisis, the other heroes — and the world — look to us first to deal with it, to rally others. We set the example."
— Martian Manhunter

The original lineup is Superman, Batman, Wonder Woman, Green Lantern, The Flash, Aquaman, and the Martian Manhunter (commonly known as the "Magnificent Seven" or just the "big seven", and considered the greatest heroes on Earth by pretty much the entire superhero community). Which almost immediately (6 issues later) started to gradually expand to include Green Arrow, The Atom, Hawkman, Black Canary, The Phantom Stranger, Elongated Man, Red Tornado, Hawkgirl, Zatanna and, finally, Firestorm. After that, the group has repeatedly disassembled and reassembled, sometimes with drastic membership changes, including a revival of the original seven. Basically, every DC Comics superhero who didn't belong to another team (and a few who did) was a member at one time or another (and even an entire team of non-DC superheroes!). And as the premier group of heroes in the DCU, when a cosmic crisis threatens, every superhero available becomes a temporary member of the JLA, such is the importance of the group.

Originally, they were the local crime-fighting club, composed of the best of the best. They were effectively a "social club" for superheroes, where they could hang out with similar people (when not fighting evil). There was no set leader, though certain heroes (such as Superman, Batman or the Martian Manhunter) often ended up taking leadership roles due to their popularity and skill. New members were chosen by voting, which might explain why several heroes that felt rather redundant were added to the roster. They had a series of special bases over the years, most notably a satellite headquarters in orbit above the Earth.

In the 80's, DC's editorial team noticed that they were being outsold by the Teen Titans and the X-Men, more action-oriented, character-driven teams. So, suddenly, Aquaman gave a big speech about how the team couldn't depend on heroes who were too busy to show up all the time, and reformed the team with a bunch of second-stringers and a few new characters. They operated out of a warehouse in Detroit (for which they got the Fan Nickname "Justice League Detroit"). For this reason they were a little ineffectual during Crisis on Infinite Earths.

A film adaptation set in the DC Extended Universe was released in 2017.