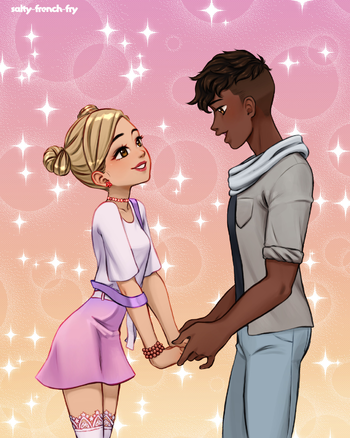 Elliot and Lisette by salty-french-fry, commissioned by the author herself

Marinette Dupain-Cheng is done. Done with dealing with lying liars who lie like Lila Rossi, and those to flock towards her lapping up every last lie. Done with Intrepid Reporters who won't verify their sources, but expect her to do the legwork for them. Done with Fair Weather Friends who turn on her at a moment's notice. Done with Collège Françoise Dupont.

was inspired by the events of "Chameleon" to address their concerns. Thus, Marinette Dupain-Cheng's Spite Playlist

follows our heroine as she changes schools and makes for a fresh start. Each chapter is named for a different song that would fit nicely into such a playlist.

In January 2021, the author begun releasing a "Remix" version, which was available exclusively on her tumblr

until it had surpassed the original in terms of chapter count. That finally happened in July 2021 with the 22nd chapter out of 41 posted and : Remix added to the title. Now the original version is exclusive to her tumblr

instead (well, and Wayback Machine). As of January 2022, the Remix version is complete.

Examples exclusive to the original version include: