The world's most famous cat, and the longest lasting animated cartoon character in history.

There are various incarnations of Felix the Cat throughout the franchise, with only a few consistent traits shared between all of them. Tropes specific to a certain Felix should go in their respective profiles below.

A few of Felix's various designs.note From left to right; the original 1920's Felix design, his mid 1920's redesign, and his 1959 Joe Oriolo redesign.

Tropes associated with Felix In General: 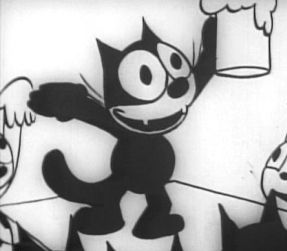 The original Felix that started it all. In the hands of Otto Messmer, Felix was, first and foremost, a thinking character, a being with a wit as fast and sharp as a razor, who could improvise to any situation at the wink of an eye, with a wide range of emotions or thoughts represented by his large, expressive eyes, as well as his detachable, shapeshifting tail. Going in hand with this was his cat like curiosity, which was frequently what got him into his mis adventures. Personality wise, the Silent era Felix can be described as a boy like anti-hero, and a survivor. In many of his early films, Felix was portrayed as an anthropomorphic housecat, who could talk and engage with humans as well as he could with any other animal, but was usually just seen as a pest or a convenience for them, so Felix was often forced to be a nomad, scraping around and traveling anywhere and going any length to get a bite to eat, and often (sometimes literally) getting the boot for his troubles. While he sometimes has altruistic qualities, being perfectly willing to help out anyone he comes across, he had just as many vices in turn and could be crafty—he was not above stealing to get a bite to eat, and he was perfectly willing to pull strings to get what he wanted on occasion. 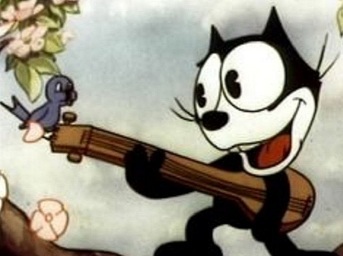 "This afternoon, we're riding through, nature and me..."

The shortest-lasting incarnation of the character, this version of Felix was created for the short-lived theatrical cartoon revival of the series by Van Beuren, as part of their Rainbow Parade series of cartoons. He only appeared in three cartoons due to the studio abruptly going belly-up in 1936. Personality wise, there isn't much to say about this Felix. He's nice, meek and kiddy, but that's about it. 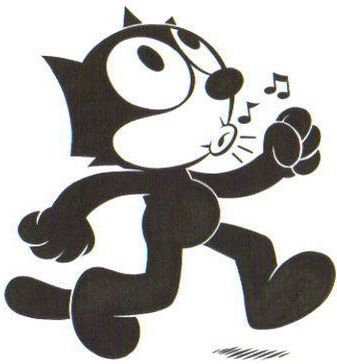 After acquiring a license to the character in the late 1950's (and later outright buying out the franchise), Otto Messmer prestige Joe Oriolo rebooted the Felix series with this version of the character. Due to moral attitudes towards cartoons of the time and network restrictions, Joe Oriolo's Felix is also divorced from the salty Silent Era Felix, but not to the extent of the Van Beuren Felix—he is a fairly laid back, pun cracking and jovial, fun loving character, loving to travel and help out anyone possible, and being friendly to virtually everyone, including his own foes—but he was also assertive and stern in the face of evil, and was more than willing to chase down his adversaries and give them what they had coming when he gets the chance, often with the help of his Magic Bag of Tricks, which was introduced in this series. 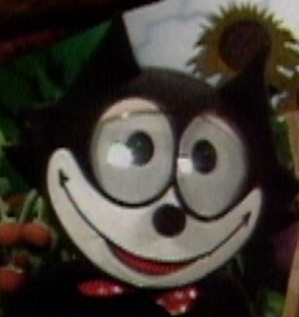 One of the more peculiar incarnations of the character, portrayed in live action costume. Due to the rarity and obscurity of the series, little is known about this take on Felix. Appearance wise, he's based on the Joe Oriolo Felix. 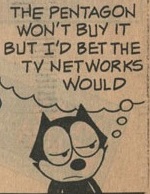 One of the more mundane incarnations of the character, and acerbic in personality. He lives as a normal housepet with Betty Boop. 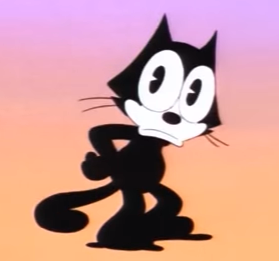 An attempt at creating an amalgam of the Otto Messmer Felix and the Joe Oriolo Felix, this Felix has the personality of a rascally teenager. He has the surreal abilities of the original Felix, but he also has access to the Magic Bag of Tricks.

The Joe Oriolo Felix, but as an infant. Both he and his adult self interact through time travel to help him learn as he grows up.