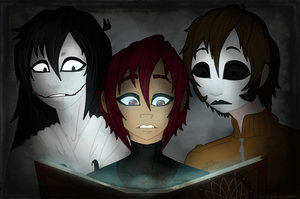 is a discontinued Creepypasta comic by Madame Macabre

, begun October 9th 2012 and updating every 1-2 weeks before being abandoned in 2014. It stars Ms. Korbyn Jumping Eagle, a girl who has been seeing strange things all her life. After her grandmother dies, she receives a mysterious old book which, upon opening, fully awakens her to the world of spirits and monsters around her. This places her into a new role as "the Seer", the bridge between the Under and Over Realms; now she must learn to work with her strange new allies and escape the monsters sent after her by Zalgo - all while maintaining her life as a college student.