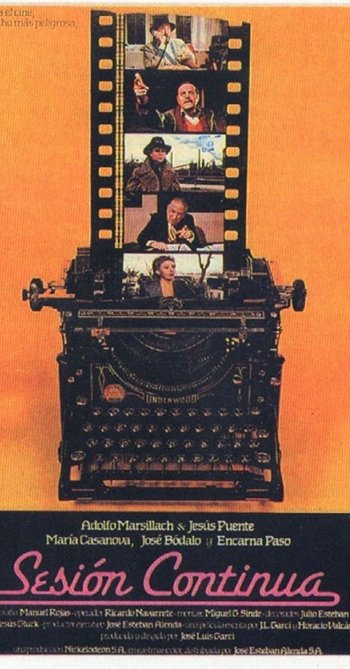 Sesión continua (aka "Double Feature", although it literally translates to "Continuous Session") is a 1984 film from Spain directed by Jose Luis Garci.

The whole film is basically a love letter to the movies. Jose Varela is a film director, and Federico Alcantara is a screenwriter and playwright. Together, they are collaborating on the script for a film called I'm Slowly Getting Depressed, which Jose will direct.

There are all the typical conflicts involved in film production. As the film opens Jose and Federico have only come up with 30 pages of script. The studio boss doesn't want any sex scenes, he'd like more action, and he hates Jose and Federico's plan to shoot the film in black and white. But Jose and Federico have personal problems of their own. Federico's wife Pili is about to leave him. Jose is estranged from his daughters. And Jose has a mysterious new lover, Mala. Or at least she may be his lover; it's not quite clear why she's hanging around.

The whole thing is basically a framework around which to hang non-stop Shout Outs to Hollywood cinema.