True Tail is a forthcoming Web series project, directed by Zachary Rich, the same guy who directed Double Rainboom. It's been through two incarnations, and this page covers them both. 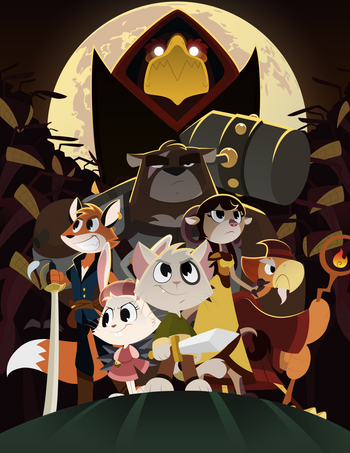 The cast of the first version.
Advertisement:

On the surface, the original True Tail looks like a story of how a young orphan cat (Caleb Truetail) teams up with a hulking brute bear knight (Brutus Ironclaw), an old phoenix wizard (Kanikus), a half-dragon half-sheep priestess (Doh-Li), a thief fox (Viktor) and a Cute But Psycho rabbit bard (Melody Briar) to fight an evil bird wizard, or in other words, Dungeons & Dragons... with animals. However, it takes place in the fantastical medieval world of Splitpaw, a land inhabited by anthropomorphic animals. Fortune and adventure await those that are willing to claim it! But there is a darkness festering within the land, casting a shadow over any would-be heroes.

True Tail follows the adventures of Caleb Truetail, an orphaned kitten looking for a family, who finds one in the most unlikely of places: a group of mercenaries. Accustomed to working alone, and willing to sell their services to the highest bidder, these mercenaries find themselves being forced to team up in order to obtain an artifact for an evil cockatrice. Will this group of rowdy "heroes" overcome their flaws and work together, or will they succumb to the treacherous plans of Eldritch the Necromancer?

Since its announcement on August 2013, True Tail grew a reasonable fanbase, and progress on the series resumed after a very long hiatus started August 2014 and ended 29 March 2015. The pilot was scheduled to be completed in 2016, but was delayed by the creators' efforts to sell the show to a network. However, in May 2015 the creators posted an animatic

of the episode... which is likely as far as it will ever get. 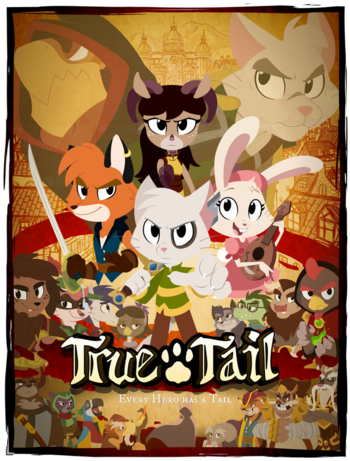 The cast of the second version.

On July 1, 2017, Skynamic announced that after a series of unsuccessful meetings with Nickelodeon, they had reworked the show in an effort to make it more network-friendly. (Other changes included giving several characters new surnames and recasting most of the voice actors from the unfinished pilot.) The revised premise centers on True Tail, a school for prospective heroes. Caleb Lightpaw and Melody Briar are students, along with younger versions of Doh-Li Ling and Viktor Silvertod; the faculty includes Brutus Ironclaw and Kanikus; and several new characters, both pupils and teachers, are introduced. (The creators have said that this version might be a Prequel to the original.) Therefore, this page is now divided into two sections: one for the old version, and one for the new one.

The Website for Skynamic Studios, the studio that makes True Tail, is found here

In June 2019, the creators launched a Kickstarter campaign for the series with a goal of $25,000. The campaign successfully concluded on 21 August 2019, ultimately raising $59,500 — more than twice enough to fund a 9-11 minute pilot for the series.

The creators will soon launch a Patreon account to further fund the series.

Now has a character page in need of construction.