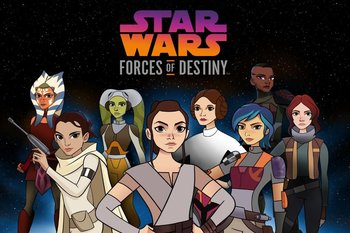 Find your hope. Find your courage. Find your destiny.
"The choices you make, the actions you take, all shape us into forces of destiny."
— Maz Kanata
Advertisement:

Star Wars: Forces of Destiny is a Lucasfilm animated web series with shorts focusing on the heroines of Star Wars. It covers multiple eras of the saga and features Daisy Ridley, Lupita Nyong'o, Felicity Jonesnote Though later replaced by Helen Sadler for Volume 3 and beyond, and Kelly Marie Tran reprising their roles as Rey, Maz Kanata, Jyn Erso, and Rose Tico most notably. Also reprising their roles on the series are Star Wars animation veterans Ashley Eckstein as Ahsoka Tano, Catherine Taber as Padme Amidala, Matt Lanter as Anakin Skywalker, Tiya Sircar as Sabine Wren, Vanessa Marshall as Hera Syndulla, and Gina Torres as Ketsu Onyo, and even actors from the live-action films including John Boyega as Finn, Anthony Daniels as (who else) C-3PO, and Mark Hamill as Luke Skywalker note The first time he has actually voiced an animated version of his character since the Holiday Special. Star Wars newcomer Shelby Young voices Leia Organa.

It debuted on the Disney YouTube channel in July 2017. The preview can be seen here

In 2018, it received an Adventures spin-off comic series under the subtitle of Adventures: Forces of Destiny.