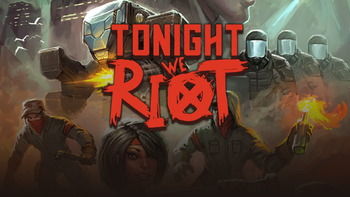 "The world is the throes of global capitalism."

Tonight We Riot is a Beat 'em Up game with Real-Time Strategy elements, developed by the game developer collective Pixel Pushers Union 512, and released in 2020.

In the dystopic future of the year 20XX, the forces of capitalism runs rampant, lead by the company Whippleco and their CEO, Chaz Whippleton III. Across all fields and stripes, workers are being ever increasingly exploited and squeezed of their lifeblood by the rich, who owns the media and effectively controls the political system and the local law enforcement. Despite toiling for hours on end across multiple jobs, the pittance of a salary most workers receive for their thankless drudgery, means they can no longer make ends meet. At first, peaceful protests for better pay and working-conditions were attempted, but they were only ruthlessly beaten to the curb by the police. There is only one way forward now, and that is for the workers to size the means of production by force. It is up to you to command a ragtag army of rebels, as they liberate workers and fight for revolution across five different worlds.

This game was released for the Nintendo Switch, Steam, and GOG.com on May 5th 7th and 8th of 2020 respectively.