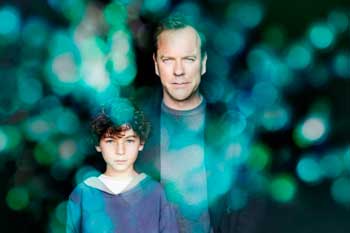 A 2012 series produced by Tim Kring and starring Kiefer Sutherland.

Since Martin Bohm's wife died in the September 11 New York attacks, he's been raising his mute, number-obsessed son Jacob as best he can. Jacob has a strange ability to see complex patterns in the world, and does his best to help people who need to connect one another for the better. Upon finding his son's ability, Martin tries to help, but since Jacob mostly communicates through scrawling numbers, wandering off into crowds, and apparently making a nuisance of himself, it's not easy for him to work out what he's doing, or why.

In addition to Martin's struggles with his son, the show has several characters who seem to be wound up in the patterns Jacob sees, such as two teenagers in occupied Iraq trying to achieve fame in the wartorn country and the fireman who attempted to save Martin's wife, trying to make up for his failure.

A severe ratings crash during the show's (delayed) second season led to Fox canceling it only one day before its finale in May 2013. As with Dollhouse, this means the show ended after only two half-length seasons of 13 episodes each.