Glasses Are Sexy
aka: Sexy Spectacles 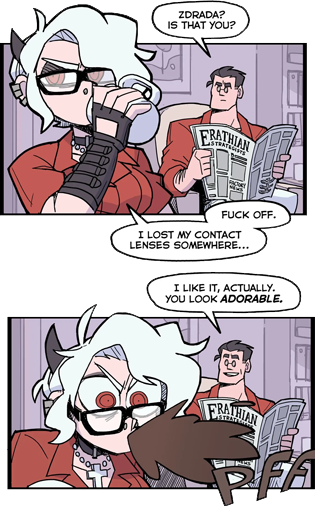 They do give her specs appeal.
"I could wear the glasses again..."
— Lilah Morgan, Angel, "Habeas Corpses"
Advertisement:

What Sexy Secretary, Hot Librarian, Hot Scientist or Sexy Nerd would be complete without a pair of glasses? It seems like adding a pair of spectacles to an already good-looking man or woman can increase their hotness substantially. After all, without them a character couldn't coyly nibble at the end of the ear piece or give sultry looks over the top of the lens frames. Though possibly the best thing about them is what could happen when those glasses get taken off...

The belief that "Glasses Are Hot" is a common fetish of characters, possibly because it's pretty PG as far as fetishes go, and relatively widespread in Real Life. Due to the appeal of this trope, some spectacle wearers may be unwilling to correct their eyesight even when they are have the opportunity to do so.

Compare Bespectacled Cutie, when the wearer is merely cute, rather than sexy, and Speech-Impeded Love Interest, when a speech defect also serves as a "turn-on". Tends to overlap with Stoic Spectacles, surprisingly enough. The Kichiku Megane also draws powers of sexiness from glasses. Contrast Nerd Glasses, when ugly glasses decrease sexiness.