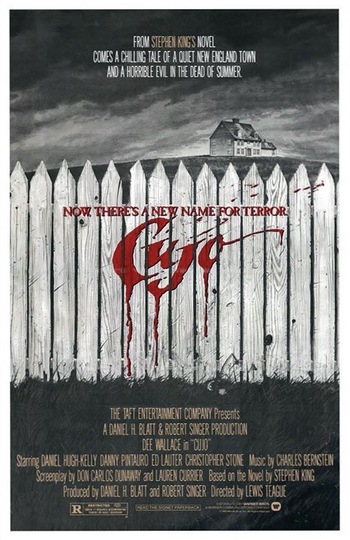 It's summertime in Castle Rock, Maine. Two of the resident families, the middle-class Trentons and the working-class Cambers, are going through a rough patch.

Vic Trenton has discovered that his wife Donna has been having an affair, and as if that weren't enough, his advertising agency is in dire straits thanks to problems with one of their clients' products. Vic is forced to travel out of town to try and fix things with the agency, leaving Donna and their five-year-old son Tad home alone for two weeks.

Meanwhile, Charity Camber is enduring a marriage to her dominating and abusive husband Joe, who works as a mechanic. One day, a lucky lottery ticket brings her $5,000, and possibly a way out for both her and their 11-year-old son Brett, if she plays her cards right. In the midst of all this, the Cambers' pet dog, Cujo, chases a rabbit through a field one day that summer, and into an underground bat cave, where one of the bats ends up biting Cujo on the nose.

And with that, two families at domestic crossroads are about to have their lives altered in bloody, violent fashion. For Cujo is a five-year-old, two-hundred-pound Saint Bernard who has never had his rabies shots...

Cujo, the second of Stephen King's novels to feature the fictional Maine town of Castle Rock, was published in 1981, and adapted into a film starring Dee Wallace in 1983. It's notable for being a kind of pseudo-sequel to King's earlier novel The Dead Zone (the first of his works to take place in Castle Rock), beginning shortly after the infamous Castle Rock Strangler's murder spree. A few minor characters from The Dead Zone appear in cameos, and it's implied that the titular dog might be possessed by the ghost of the Castle Rock Strangler himself.

This book/film contains examples of: