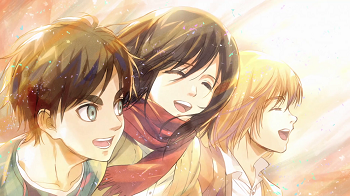 "From the day we were born. There was something special about all of us. We are free."
Attack on Titan is a harsh and unforgiving setting, but it doesn't mean our heroes can't bask in camaraderie, remember their valiant efforts, and look forward to a hopeful future.

Advertisement:
open/close all folders
The Fall of Shiganshina

"The Night of the Graduation Ceremony: Humanity's Comeback, Part 2"

"The World the Girl Saw: The Struggle for Trost, Part 2"

"Response: The Struggle for Trost, Part 6"

"Can't Look Into His Eyes Yet: Eve of the Counter-attack, Part 1"

"What Needs to be Done Now: Eve of the Counter-attack, Part 3"

"A Choice with No Regrets"

Clash of The Titans

"Ruler of the Walls"

"Night of the Battle to Retake the Wall"

"The Town Where Everything Began"

"The Other Side of The Wall"

The Truths of Marley

War for Paradis
Ragnarök
Advertisement:
Meta and Out of Canon Moments