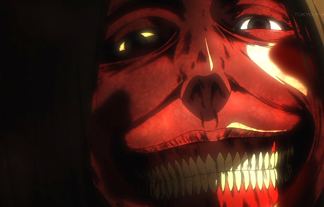 Slasher Smile Incarnate.
Attack on Titan's premise is a conflict between normal humans and enormous, man-eating Titans. Hajime Isayama plays up every Primal Fear of giants and being eaten by them to the hilt. Naturally, there's many cases of Squick, Gorn, and Cruel and Unusual Death as characters find themselves being Eaten Alive.

Advertisement:
open/close all folders
In General
Fall of Shiganshina

"The Night of the Closing Ceremony: Humanity's Comeback, Part 2"

The Struggle for Trost

"The World the Girl Saw: The Struggle for Trost, Part 2"

Advertisement:
Eve of the Counterattack

"Can't Look Into His Eyes Yet: Eve of the Counter-attack, Part 1"

Clash of The Titans

"Ruler of The Walls"

"The Town Where Everything Began"

"The Other Side of the Wall"

The Truths of Marley

"The Other Side of the Sea"

"The Door of Hope"

"Memories of the Future"

"The Dawn of Humanity"

Misc
On that day, mankind received a grim reminder: we lived in fear of the Nightmare Fuel and were disgraced to browse in these cages called tabs.