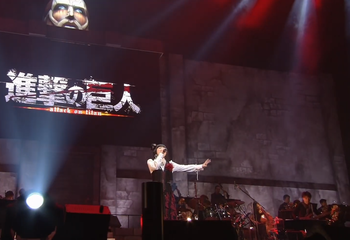 The animated adaptation of Attack on Titan contains four catchy opening / ending credits themes and an epic soundtrack written by Hiroyuki Sawano. In the latter's case, nearly all of his associated singers and songwriters brought out their A-game with very memorable songs, and the soundtrack's composition blends in perfectly with the series' overarching themes. As icing on the cake, this soundtrack won the 2014 Tokyo Anime Award for Best Music note the Tokyo Anime Award is always given for the preceding year, in this case 2013. As a bit of a challenge though, many of his themes are titled such as "進撃 vc-pf20130218 巨人", which seems to be his personal shorthand, translating to "Attack [primary instrumentation] [date of production] Titan", so good luck finding whatever track you're looking for.