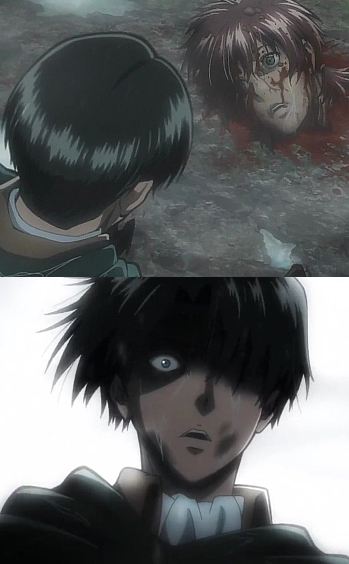 Attack on Titan is an ode to the struggle for survival against insurmountable odds. With the high body count of characters we have come to know and like, it's little wonder the series is full of feels.

Advertisement:
open/close all folders
The Fall of Shiganshina
This entry concerns the first attack of the Colossal and Armored Titans on Wall Maria at the District of Shinganshina, allowing Titans into the outer region of the Three Walls, and the aftermath of the attack.

Battle of Trost
This entry concerns the Colossal Titan's attempt to breach Wall Rose at the District of Trost, and the battle that ensued henceforth.

"The World The Girl Saw: The Struggle for Trost, Part 2"

"Wound: The Struggle For Trost, Part 8"

The 57th Expedition
This entry concerns the 104th recruits' conscription into the Survey Corps and their first expedition outside Wall Rose into Titan country, detailing their first encounter with the Female Titan.

"What Needs to be Done Now: Eve of The Counter-attack, Part 3"

This entry deals with the covert operation to smoke out the Female Titan in the interior of Wall Sina at the District of Stohess.

Clash of The Titans
This entry concerns the sudden apparition of Titans in the interior of Wall Rose, and the ensuing battle between the Survey Corps and the Colossal and Armored Titans.

Advertisement:
The Uprising
This entry deals with the Survey Corps' clashes with the Interior Military Police, causing them to rebel against the Royal Government.

"Ruler of The Walls"

"Night of the Battle to Retake the Wall"

Return to Shiganshina
This entry deals with the Military Junta-backed Survey Corps expedition to recover Wall Maria, and the battle between the Corps and the Colossal, Armoured, Beast and Cart Titans.

"The Other Side of The Walls"

The Truths of Marley
This entry concerns the conclusion and aftermath of the war between the nation of Marley and the Mid-East Alliance, whose aftermath causes Marley to enact plans to carry out an invasion on Paradis Island, and the surprise attack of the Attack Titan and the Survey Corps on the Liberio Ghetto at Marley.

"The Other Side of the Sea"

"The Door of Hope"

War For Paradis
This entry deals with the planning and aftermath of the Liberio Attack, the Survey Corps' return to their home, and Eren's rebellion against the Military Junta.
Ragnarök
The end approaches... Eren has united with Ymir, The mother of every living Eldian and gained the unfettered power of the Founding Titan. Is he The Destroyer? Or The Creator? And what New Beginning is about to be born?
Advertisement:
Other Stories