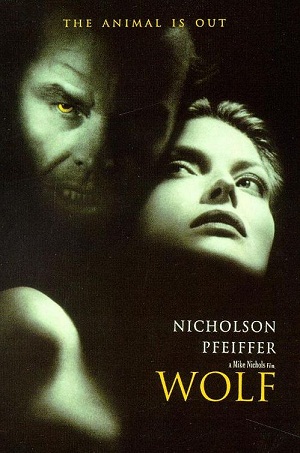 Will Randall (Nicholson) is the aging managing editor of an influential publishing house. His skills have somewhat diminished with age, and his disloyal protege, Stewart Swinton (James Spader), has taken full advantage. Their employer, tycoon Raymond Alden (Christopher Plummer), announces Will's demotion in favor of Stewart, while Will's wife Charlotte (Kate Nelligan) has started an affair with Stewart.

However, Will's life seems to be about to change for the better. A chance encounter with a lone wolf on a snowy country road of Vermont results in a single small bite on his arm. Gradually, he becomes rejuvenated, revitalized, and more aggressive, which allows him to outperform Stewart and get his job back. His sexual appetite has also increased, and he seems to have a mutual attraction with Laura Alden (Pfeiffer), Alden's world-weary daughter. His new superhuman senses of sight and smell are part bewildering and part fascinating.

But then our hero discovers himself taking on animal characteristics and spending nights hunting deer in nearby forests, waking up at morning with hazy memory of the night's activities but plenty of blood on his hands to give him a hint. Will finally realizes what is going on. He is becoming a werewolf... and the process has just begun. Worse, he's not certain he hasn't been spreading his condition to others.