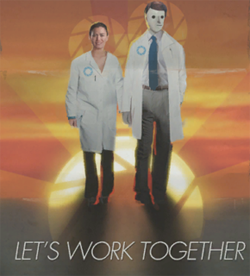 Let's Work Together is a weekly Genius: The Transgression game set across the globe (mostly London and Chicago) The world is comprehensive, including elements of several other New World of Darkness settings, including Mage: The Awakening, and Vampire: The Requiem. The story is set a year after the continuing continuity of the morphE game being run by one of the player characters. The plot follows psychologist Dr. Channery Keene, fashionable college student Charlotte Aranda and southern belle vampire Scarlett Upshaw as they are thrust in to the rich history of the Genius community and the mysteries which surround the death of its most prominent figure Maniac Madsen.

The game begun with a test session run during autumn 2011, and proper sessions supposedly began in January 2012, but nothing else was known since then. The GM was also supposedly running an ARG game with images and audio hinting at plot points and the vast history of the setting before the launch, but the only known page is no longer accessible.

Characters created for this roleplay: 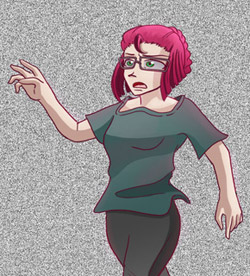 Channery Keene was born on the northeast coast, in a hospital just ten minutes from the Atlantic. She grew up as a fairly regular, if bright child, and, taking an interest in other people, got her doctorate in psychiatry. She took great offense at the people who said that the field was useless or nonexistent, and decided rather than to continue to take patients, to use her doctorate to further the field itself. In July 2011 she received a job offer to work with a growing mental care clinic in Chicago. From there things get hazy, as Channery has lost most of her recent memories. What is clear, however, is that she took the time to catalyze as a Genius and used her new abilities to develop a mechanical brain. 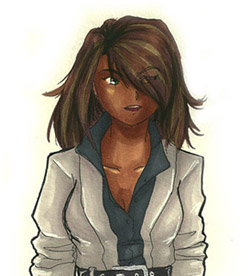 I swear I'm not crazy.

Charlotte Aranda was born and raised in Wheaton, IL and until recently studied at Pleiades University with an undeclared major. Her Genius parents wanted her to go in to computer science, but her passion lies on the stage, singing and dancing and performing for audiences all around the world. Against her wishes and wills she was forcibly catalyzed in Maniac Madsen's Prestine Testing Facility and now has to face up to the Genius world which she was being groomed to accept. 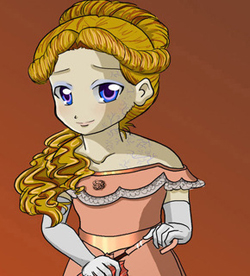 I'll need the blackest parasol you ever did see.

Scarlett Upshaw is a vampire, embraced during the civil war era in Georgia. She considers herself to be a proper Southern lady and prides herself on her family name and her refined manners. She plays dumb and weak nearly all the time, sometimes even without wanting to. She'd prefer to be scoffed at for being an empty-headed little girl than to be called a fearsome abomination. Most of the time it's to her advantage to be under-estimated. Never the less, she has a lot of power hiding in her small frame, and isn't too phased by the thought of killing or enslaving someone.

Scarlett spends her time running errands for her family to check on their investments. Any time not spent on that she enjoys seeing horror films and acting out phenomena from them in the homes of unsuspecting victims. She has a bad habit of stealing little things from the houses she “haunts” and from really any place she spends a significant amount of time in. After a long series of lucid nightmares involving werewolves in torpor, Scarlett is very wary of any wolf types. At the moment she's been assigned by her family to check up on the Genius, Mr. Lucas Lane. 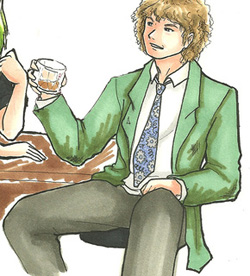 Lucas Lane. Genius Extraordinaire. One of the founding members of The Madsen Foundation and owner of a lovely mansion out in the tropics which is powered by a volcano.

Enigmatic, eccentric and not very forthcoming with answers, he is the benefactor of the pair of freshly awakened Geniuses discovered in the testing facility and the commissioned designer of vampire technology for the esteemed Upshaw estate. He is crass, rude and has a reputation that spreads across the globe. Don't be intimidated, though. He's as pleasant as can be. 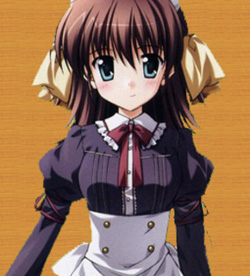 Good day to you.

A robotic maid and the only artificial intellegence on the planet capable of creating wonders for themselves. Tea is naive to all things in the world as she has never left the island before the party arrived and thusly has only ever met Lucas and Watt. 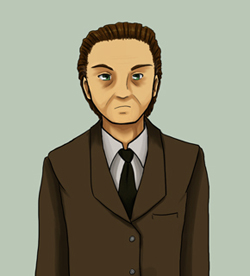 Watt is a beholden who has worked for Lucas for nearly 30 years. He was teleported to the testing facility while it was operational and witnessed his best friend destroyed by the havoc of an incomplete wonder. With his imagination broken he has been a loyal servant to Lucas for decades. He is obsessive compulsive, stuffy and lacks a sense of humor. 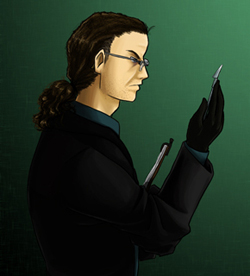 Reynold Sinclair is the current CEO of the Madsen Foundation, a charity created to maintain the legacy of Maniac Madsen. Besides his appearances at GenCon he does not really have too much of a public face. He shares a long history with Lucas and a strange recording at the freshly re-activated testing facility suggests that he may be personally responsible for the death of Madsen.

At this time the party only have hearsay and reputation to base their opinions on him and the one doing most of the talking last saw him while engaged in a fist-fight with the man, 10 years ago.

The man, the myth, the legend. Madsen is the creator of the Genius community of America and by far the most recognizable face in it. During his life he created a vast number of Wonders and did everything he could, ethical or otherwise, to catalyze the world and open their eyes to the potential of GeniusTech. Died in 1991.

Madsen and Reynold's personal beholden. He catalyzed as a Genius upon Madsen's death. Currently runs the Beholden Liberation Project to try and free all of the beholden in the world and fix their broken imaginations.

Warden of New Bedlam and the head of research there. She specializes in matters of the mind and has spent her career trying to isolate the parts of the brain responsible for all different aspects of Genius.

Charlotte's mother, a Genius who plays the engineer in the marriage. Acts unfazed by any events that are brought to her. She values her role as a Genius and is overjoyed that her daughter has catalyzed.

Charlotte's father, a Genius who plays the programmer role in the marriage. He worries far more than his wife, but is happy to see Charlotte catalyzed and has been waiting patiently her whole life for it to happen.

Scarlett's father. A fierce man who commands respect and admiration from all others. He puts the family name above all other things and works tirelessly to maintain it.

Scarlett's younger sister. Permanently frozen in the body and emotional state of an 8 year old. She is widely considered to be the scariest and strongest member of the family and is often used by Bryant as the strong arm. Has a rebellious streak and is kept aside during important business functions and social gatherings.

Scarlett's mother. A proud woman who is in love with the luxury of high life as much as her family. Despite being a vampire, she still holds true to the southern Christian values of the civil war era and makes sure the rest of the family mind their manners, too.

A Genius Hunter hybrid who has taken a personal interest in tracking down Scarlett and her bloodline.

A guard who has shown up at convinient moments to interact with the party. He is easy to intimidate and seems very meek and feeble, despite his proffession.

A Mekhet vampire in London who was tasked with escorting the group around during their stay.

A Genius investigator in London who believes herself to be the Sherlock Holmes lineage child. She is not.

A Genius who specializes in hard light. He has the capacity to create physical holograms and structures which are practically impossible to detect as fake. Revealed to be on his dying legs, his holographic projections run off of his brain map and are keen to continue their research beyond their creator's death. Currently hooked up to the New Bedlam asylum as a source of mania and serving as a guard there.

The vampire who embraced the Upshaw family. Old, powerful and worthy of respect.

A popstar sensation from Japan who has become unbelievably popular in the UK. Performs as a [[Vocaloid hard light hologram]].