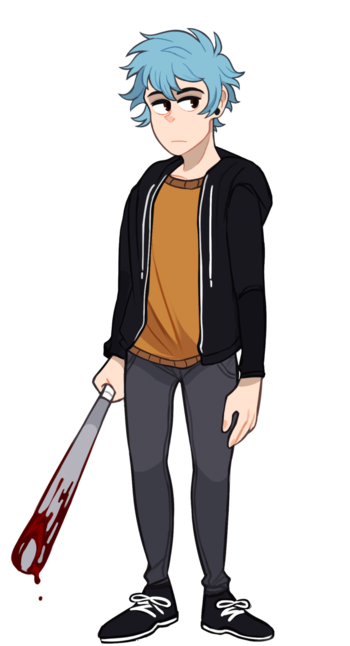 The main protagonist of the story. Joki is a soft spoken and reserved boy who gets trapped in a mysterious city called Aisho. Despite his lonely personality, Joki can get easily flustered and awkward at times.

• Adorkable: His character bio states that he gets easily flustered, and his endearing dorkiness becomes evident after getting excited over finding anime merchandise in a convenience store. Just look at that face!

• Amnesiac Hero: Joki wakes up in an unfamiliar hospital with no recollection of what happened on February 29th.

• Batter Up!: Frequently seen carrying a bloody baseball bat in his official art, though he has yet to obtain one in the story.

• Deadpan Snarker: His sass becomes more frequent as he adjusts to all the bizarre events happening around him.

Joki: A bullet in the head would’ve been better by now.

• Distinguishing Mark: In the form of a star shaped birthmark on his shoulder.

• Is This a Joke?: Quotes this almost word for word when he mistakes the animated nurses for people in a suit playing a prank.

• Knife Nut: Out of all the guns and weapons around him, he prefers to take a knife to threaten Ace. Stabbing someone is more dramatic, after all.

• Mirthless Laughter: Joki’s habitual response to being placed in life threatening danger is to let out a chilling laugh. Happens when he’s about to be eaten by a giant fish, and once again when Andromeda drags him into the well.

• Murder Is the Best Solution: What do you do when a kid in a mask saves you from a giant man-eating fish, tells you that the world is filled with monsters out for your blood, then jokingly points a gun at you? Easy, stab him and steal his van. Unfortunately this doesn’t work out too well for him.

• Orange/Blue Contrast: His character design consists of blue hair and an orange sweater.

• Pinch Me: Joki tries to convince himself that the floating neon fish are either the result of a dream, or being drugged by the nurses.

• Slept Through the Apocalypse: The main crux of the opening. Joki wakes up in a hospital after an unknown amount of time with no memory of what happened on February 29th. And to top it all off, he finds out that while he was dozing off, most of humanity was destroyed and taken over by a race of monsters called ‘animated.’

• Used to Be a Sweet Kid: A constant look of pure joy, wishing to make everyone laugh and smile…it makes you wonder what happened in between then and the present to turn him into such a cynic.

• You Gotta Have Blue Hair: It’s unusual enough to be mentioned In-Universe. 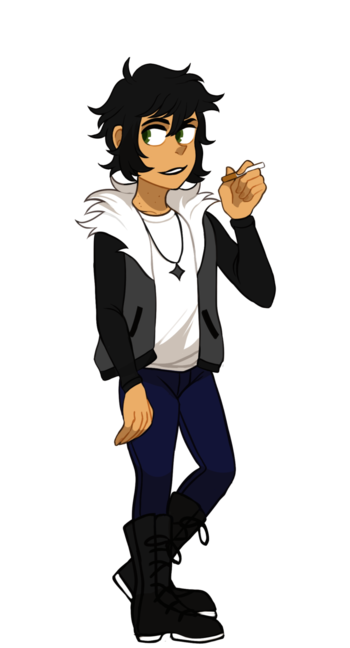 A reckless and naïve punk who’s always seeking attention. He tends to show off and make a fool of himself.

• The Friend Nobody Likes: Both Jack and Hazel seem more annoyed than anything upon hearing that Ace got stabbed. Jack also reacts with indifference when he assumes Ace has died, much to the latter’s disappointment.

• The Gad Fly: Often says or does inappropriate things just to provoke others.

• "Just Joking" Justification: Pointing a gun at someone’s face is just his way of making wicked banter. He seems genuinely surprised when this doesn’t earn him a new friend.

Ace: I was even telling him funny jokes.

• The Nicknamer: Has a food-themed nickname for at least three members of the main cast. Jack is flapjacks, Andy is carrots, and Joki is blueberry prick.

• Sir Swears-a-Lot: He and Joki are often guilty of this. He's prone to Cluster F Bombs at times.

• Smoking Is Cool: Part of his character introduction.

• Shipper on Deck: He likes to tease Jack about his feelings for Hazel.

Ace: *whistles* Still Hazel’s little puppy? How NEEDY of you.

• What Could Possibly Go Wrong?: He goes on about how glad he is that Joki trusts him after acting so shady, instead of freaking out and attacking him. Guess what happens next.

• Wound That Will Not Heal: Jack uses a healing card on him that prevents his stab wound from being fatal, but doesn’t remove the blood or the pain. 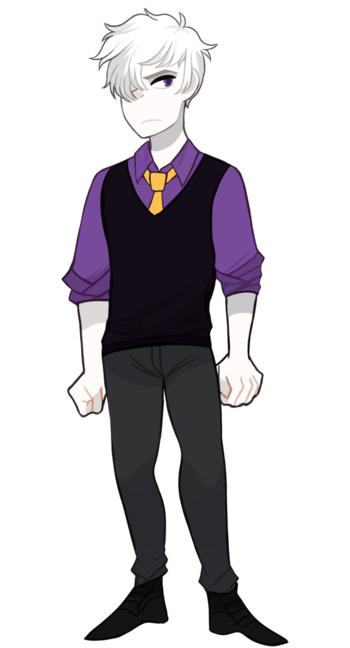 The intimidating looking Jack is Hazel’s right hand man. He has a great sense of responsibility. As scary as he may seem, he’s an incredibly sentimental and self aware individual.

• Animal Motifs: His mask resembles a wolf. Ace also calls him a puppy.

• Mad Bomber: Subverted. He's probably the most civilised guy you'll ever meet whose Weapon of Choice is explosives.

• Establishing Character Moment: Demonstrates his aforementioned responsibility when he jumps into the well to rescue Joki.

Jack: I’m not letting somebody die due to my errors. Even if it means risking myself.

• In Touch with His Feminine Side: He enjoys sewing, knitting, cleaning, and fashion magazines.

• Love Confessor: He blurts out a poetic confession for Hazel at an unamused Ace.

• Sharp-Dressed Man: Wears a formal purple shirt with a yellow tie and a sleeveless vest. 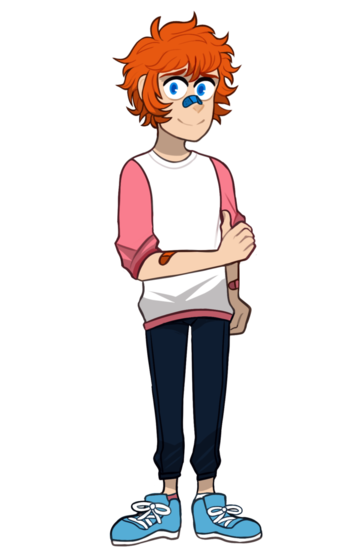 The sweet and shy Andy Zweikowski: the only thing that trumps his passion for cooking is his kindness and will to help others, even with his clumsiness.

• Animal Motifs: His mask resembles a rabbit, and Ace nicknames him carrots.

• The Baby of the Bunch: He’s relatively young compared to the rest of the cast. This causes Jack and Hazel to be very protective of him, to the point of hiding all the weapons and kitchen knives to prevent him from venturing out.

• Innocent Blue Eyes: A part of his light blue and pink motif.

• Strict Parents Make Sneaky Kids: Hazel lectures Andy about how it’s too dangerous for him to go outside with them…right as he’s about to sneak out.

• Tagalong Kid: He’s not usually able to tag along with the rest of them, but acts as this when he joins Jack in rescuing Joki from the well. He proves to far from a liability, though.

• Tampering with Food and Drink: Poisoned cookies are his Weapon of Choice.

• Team Chef: He’s first seen baking cookies, and seems to be pretty talented at it. 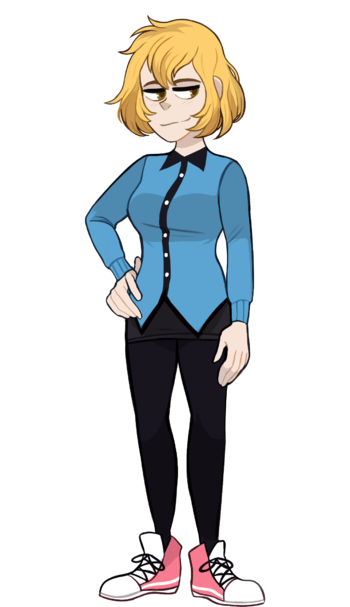 Considered the head leader of the group and also the most wanted human in Aisho’s history. Hazel Corazones, with her utter sarcasm, will win and break the hearts of many. She might be the wildest and indecipherable of them all, but she’ll do about anything to protect the ones she loves.

• Animal Motifs: She wears an owl mask along with a cape.

• Archer Archetype: Her Weapon of Choice.

• Big Eater: She consumes three quarters of a fruitcake loaf in one panel, then tries to eat more of Andy’s sweets not long after.

• Bread, Eggs, Milk, Squick: Her likes include money, sleeping, coffee and fame…along with stealing and the thrill of the kill.

• Bunny-Ears Lawyer: She’s a skilled archer who headshots an animated in one try, only to then ironically (we hope) attempt to eat the head.

• Smug Smiler: Most notably in this panel.

• Team Mom: The leader of the team who has a strong protective instinct, mostly towards Andy. She also scolds Andy for staying up too late, and thinks of Ace a little kid. 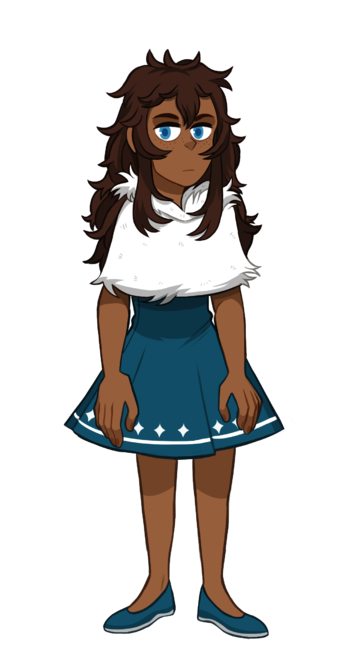 A quiet girl that lives in solitude, who spends her days dreaming nonstop. Meri doesn't have any friends besides the sheep she takes care of. It's rumored that she might be a witch.

Meri: Love, sex, and dreams...these are the things you miss and you're hungry for. 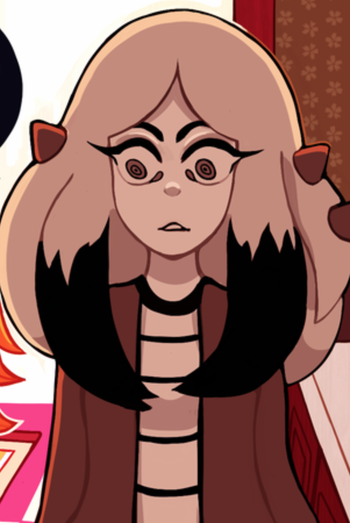 A relatively minor character, and Hazel’s intrusive next door neighbor.

• Adorable Abomination: She has a very cute appearance, even when surrounded by an Ominous Visual Glitch and preparing to tear your face off with her scorpion hair.

Hershey: I’ll rip the flesh from your face, so you won’t be human anymore.

• Cute Monster Girl: She’s even named after a chocolate brand, you can’t get much cuter than that!

• No Name Given: Her name is never mentioned in the comic, and we only know it thanks to Word of God.

• Red Right Hand: Her character design makes her look fairly cute and approachable, but if you couldn’t tell from the look of her eyes,

she’s exactly the opposite. 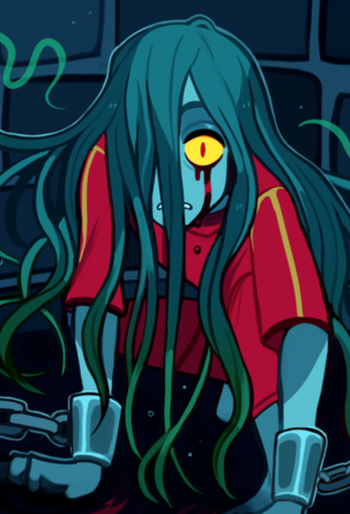 The first of many Queen animated the protagonists must defeat in order to leave Aisho city. She resides in a well after being cursed for her intense egotism.

• Big "NO!": Does this when her former subjects burn all of her portraits.

• Break the Haughty: Her stubbornness and failure to comply to Kirous’ demands ultimately led to her downfall.

• Early-Bird Cameo: An image of her can first be seen all the way back in this panel.

• A Fate Worse Than Death: What Andromeda’s curse is said to be by Kirous.

• God Save Us from the Queen!: According to Kirous, she’s an unpopular ruler who overworks her subjects and has no desire to entertain anyone but herself.

• Green and Mean: She used to be a more softer teal before the curse.

• How the Mighty Have Fallen: One day, she’s a Queen living a life of pure luxury. A few moments later, she’s chained inside of a well.

• Humiliation Conga: She’s given a harsh "The Reason You Suck" Speech from Kirous, her subjects delightfully burn all of her paintings while she is forced to watch in horror, she’s thrown down a well, and worst of all, she loses her extravagant royal outfit for a plain red jumpsuit.

• It's All About Me: Quotes this word for word when boasting about her upcoming art exhibit.

• Meaningful Name: She’s named after Andromeda from Greek Mythology, who was chained to a rock in order to be sacrificed to a sea monster after her mother Cassiopeia claimed she was more beautiful than a sea nymph, and therefore committing an act of hubris. In this case, she’s both the hubristic mother and the sea monster.

• Red Eyes, Take Warning: It’s a little too late to take warning once you’re already trapped inside a well with her.

• Slasher Smile: Sports one while dragging Joki into the depths.

• Tears of Blood: A defining physical trait of hers. It would serve as a Red Right Hand if not already for her red eyes and Yellow Eyes of Sneakiness. 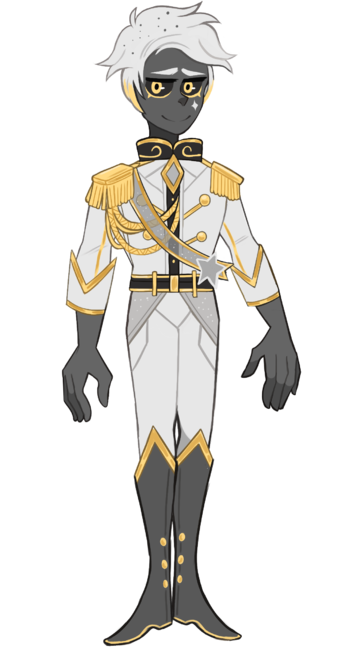 The Mayor of Aisho City, idolized by many animated. He’s the top ruler and controller of Aisho. Kirous’ main objective is to make Aisho a place of personal absolute bliss.

• Affably Evil: Treads onto Faux Affably Evil territory when dealing with Andromeda. He behaves civilized and kind towards his citizens, but don’t get on his bad side. Try not to be a human, either.

• Black Eyes of Crazy: He has black sclera, with Supernatural Gold Eyes to match.

• Manipulative Bastard: He has the entire city of Aisho wrapped around his little finger.

Andromeda: We’re all twisted pieces of your own game, for your own pure pleasure!!

• Names to Run Away from Really Fast: His name means ‘curse’ in Finnish.

• "The Reason You Suck" Speech: He delivers a heavy one to Andromeda starting from his very first line of dialogue.

• Ultimate Authority Mayor: Justified as Aisho is a city, not a country, and the Queen’s only role is to entertain the masses.

• Villain with Good Publicity: Andromeda’s subjects are absolutely delighted to see him, and treat him with much greater respect than their Queen.

• White Hair, Black Heart: His desire to eliminate all the humans in Aisho and his treatment towards Andromeda gives us a glimpse into his true personality.