Characters / A Song of Ice and Fire - House Reed

This is a character listing for the members of House Reed who appear in A Song of Ice and Fire. 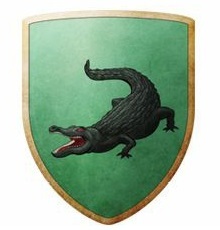 "To Winterfell we pledge the faith of Greywater. Hearth and heart and harvest we yield up to you, my lord. Our swords and spears and arrows are yours to command. Grant Mercy to our weak, help to our helpless, and justice to all, and we shall never fail you. We swear it by earth and water, we swear it by bronze and iron, we swear it by ice and fire."
—Jojen and Meera Reed

The Reeds lead the crannogmen, who live in swamps and marshes by the Neck. They first swore fealty to the Starks thousands of years ago, back when they were still the Kings in the North. Their current head, Howland Reed, is The Ghost, but his two children Meera and Jojen serve as Bran's companions throughout his journey. The minor houses of the Neck that are sworn to House Reed include Houses Blackmyre, Boggs, Cray, Fenn, Greengood, Marsh, Peat, and Quagg. They are the southernmost house sworn to the North and one of the poorest lordly houses in Westeros.

Their seat is the elusive Greywater Watch while their sigil is a black lizard-lion (crocodile) on grey-green. Their motto is unknown.

Current Lord of Greywater Watch, Howland is one of Eddard Stark's closest friends. Has yet to make an appearance in the books. 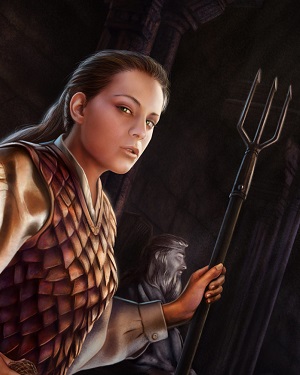 "Sometimes the knights are the monsters, Bran."

Howland's oldest child, Meera acts as a Cool Big Sis and voice of reason on Bran's journey beyond the Wall. 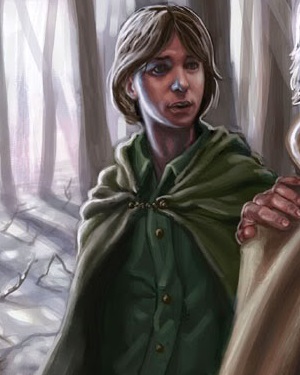 "If ice can burn, then love and hate can mate."

Heir to Greywater Watch, Jojen has the greensight, special Psychic Powers that used to be common among the Children of the Forest and occasionally show up in children of families that still keep the Old Ways.