Characters / A Song of Ice and Fire - House Mormont

This is a character listing for the members of House Mormont in A Song of Ice and Fire. 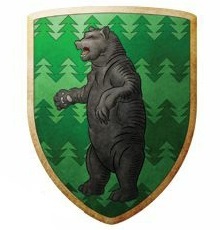 The Mormonts are old, proud Stark bannermen descended from the blood of the First Men. Currently, their lady is Maege Mormont, ruling after her brother Jeor Mormont joined the Night's Watch (he's Lord Commander at the beginning of the series) and his son Jorah went into exile, currently serving under Daenerys Targaryen, leaving the house in an impoverished state to his aunt Maege. Maege has five daughters, and her current heir is the oldest, Dacey. Their seat, Bear Island, is an island in the Bay of Ice that is described as consisting mainly of mountains, forests and bears. It is also often attacked by Ironborn raiders and the occasional band of Wildlings, prompting the women to learn how to defend themselves from all these threats. Fittingly, their sigil is a black bear on a green field. The pine tree in the Hoare coat of arms signified the other side of Bear Island.

Legend states that King Rodrik Stark won Bear Island after he defeated the then Ironborn ruler at the time in a wrestling match, then awarding the lordship to the Mormonts. Previously, Bear Island had been ruled by the Woodfoots, who had been exterminated by the Ironborn. It's not known whether the Mormonts are originally from Bear Island in the first place or whether they coexisted with the Woodfoots at the island. Another theory is that the Mormonts were distaff Woodfoots from the female side. Up until the War of Conquest, Bear Island was part of the Kingdom of the Isles and Rivers under the Ironborn rule of House Hoare of Orkmont, having been given back to the Mormonts and placed once again under the wardenship of House Stark.

The Mormonts are the owners of the ancestral Valyrian steel sword Longclaw, given to Jon Snow by Lord Commander Jeor Mormont having received it from his son Jorah, who surrendered it when he fled Westeros. 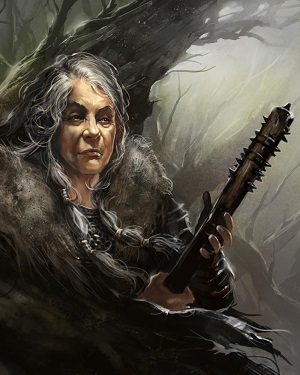 "We are stronger than we seem, my lady."

Current Lady of Bear Island and Head of House Mormont, inheriting the position from her nephew Jorah. She has five daughters: Dacey, Alysane, Lyra, Jorelle, and Lyanna. 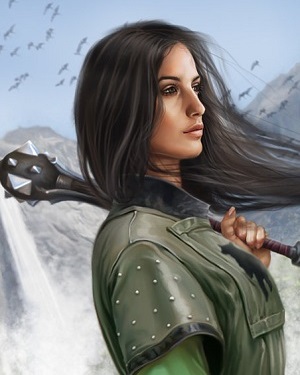 "I've fought beside the Young Wolf in every battle, and he hasn’t lost one yet."

Maege's oldest daughter and heir. She follows her mother south with the Northern army and quickly distinguishes herself as one of the fiercest warriors under Robb's command. 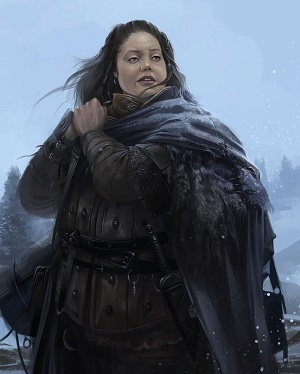 "My children were fathered by a bear. Mormont women are skinchangers. We turn into bears and find mates in the woods. Everyone knows."

Maege's second daughter and new heir following Dacey's death. She joins House Mormont with Stannis Baratheon's forces after Roose Bolton is installed as Warden of the North. She is assigned by Stannis to guard Asha Greyjoy, who had been taken prisoner at Deepwood Motte.

"Bear Island knows no king but the King in the North, whose name is STARK."

The youngest daughter of Lady Maege. Serves as the de-facto Lady of Bear Island as her mother and elder sisters are not currently present at the family hall.