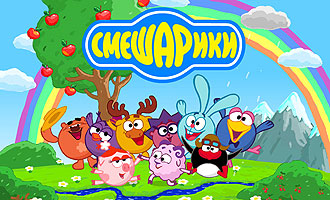 Known in its native Russia as "Смешарики" (Smesharki) KikoRiki is one of the more successful cartoon projects in The New Russia, a series of 6-minute animated shorts about nine highly-stylized, cute ball-like anthropomorphic animals - hyperactive adventurer Krash (a rabbit), his best friend, level-headed collector Chiko (a hedgehog), beautiful fashionista Rosa (a pig), nerdy mechanic Pin (a penguin), cute farmer Barry (a bear), sweet cook Olga (an owl), brainy scientist Dokko (a moose), somewhat nervous poet Wally (a ram), and elderly artist Carlin (a crow) —the show's Russian name can be roughly translated as "Funballs". The show was launched in July 2004, getting Un-Canceled in 2020, eight years after the original show ended in 2012.

The show often boils down adult themes such as prostitution, gambling, Internet addiction, etc. to a level at which children can grasp the basic concept through metaphor, and for its reflection of the eclectic culture of post-Soviet Russia. In the end, though, it remains and is seen as a fun, friendly children's show—just with heaps of Parental Bonus.

Was dubbed in the United States by 4Kids Entertainment as GoGoRiki, which, in its usual fashion, changed all character names and removed many of the Russian cultural references. In this version, all names end with -riki (Although characters would often shorten their names, and won't use "-riki" parts of their names when talking to each other), which doesn't make sense by the rules of Russian grammar, since "smeshariki" is supposed to be the plural form of the type of Funny Animal that the characters are. This dub aired in 2008-2009 and covered 92 episodes out of 215. Another dub was made at around the same time, under the new title of BalloonToons. The show would later be redubbed under the title KikoRiki, which has stuck since then and was used by other countries, such as Germany.

The series had several spin-off over the years:

Additionally, three CGI movies with bigger focus on the plot were made: KikoRiki. Team Invincible, KikoRiki: Legend of the Golden Dragon and KikoRiki: Deja Vu.

To avoid the confusion, this page will refer to characters by their names from the FUN Union dub.