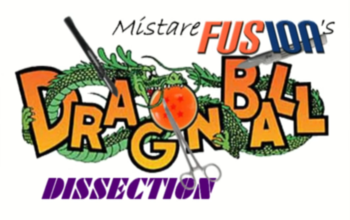 Dragon Ball Dissection is a web series created and hosted by Lance Rumowicz, a.k.a. MistareFusion

. In the vein of History of Power Rangers, he critically analyzes the Dragon Ball manga from beginning to end, as well as the animé adaptations of each arc, and the various specials, spin-offs, and Non-Serial Movies.
Advertisement:

The series began on January 12, 2012, concluding his analysis of the manga 10 years later. New episodes are released on Monday on a roughly biweekly basis.

MistareFusion has a rating system going from the arc he enjoyed the most, to the least. It doesn't mean he considers the best arc perfect or the worst arc horrible, since he enjoys almost everything about Dragon Ball... with at least three exceptions.

Watch the entire series from the beginning here.

This work provides and discusses examples of: