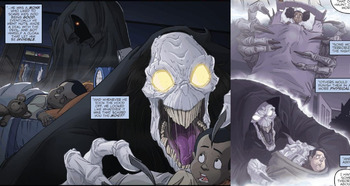 "And then it basically started eating the children?"..."Basically, yeah, it was stealing extra juice from the kids in the crowd. That was its plan the whole time—if it had not been fighting the trap, it could have emptied every kid in the 5 boroughs."
"I am the Destructor. I am the Architect. I will pave over your fields to start anew. I will fill your seas with concrete and stone. I will pierce your world with girders of steel and panes of glass. I will crush your world under the weight of my cities. I will smother your creation under my own!"
—Ivo Shandor, 2009 game

When the worst ghouls, ghosts, and demons of the spirit world terrorize New York and the world, Who You Gonna Call? These are the vilest, most evil beings the Ghostbusters have faced throughout their long careers.