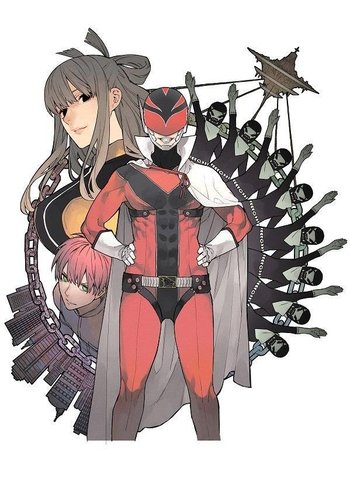 Thirteen years ago, the immortal Evil Army Kaijin attempted an Alien Invasion on Earth, only to be shortly thwarted by the Ryujinnote Dragon God Sentai Dragon Keeper and their Divine Weapons within a year. All of their commanders were eradicated, and their mooks, the Dusters, were eventually forced into a ceasefire agreement: The Keepers would stage weekly live battles on Sundays, where the Dusters are forced to be their butt monkeys and purposely lose to them every week in exchange for their lives being spared. Thirteen years of this have passed, and one Duster, D, decided he's had enough of this farce. Using a Human Disguise, he plots to eliminate the Keepers from the inside through enlisting in their recruitment programme, but soon learns that he isn't the only person with the same plan in mind, and realises he may have gotten way too in over his head.