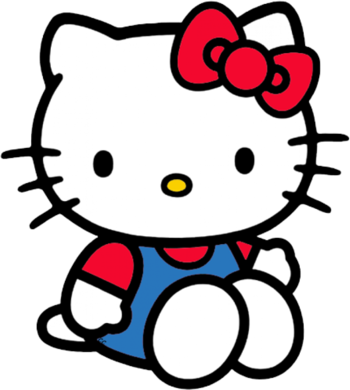 Created by Yuko Shimizu and licensed by Sanrio, this little cat has been marketed in America just as long as she has been in Japan. For many of us, this was our first taste of anime chibi art, and we didn't even know it yet. Unlike American cartoon animal mascots (like Snoopy, Garfield, or Mickey Mouse), she started out as a marketing icon, with actual media (including quite a few cartoons and Video Games, including an MMORPG) all coming later.

One explanation given by Sanrio spokespeople for why she doesn't have a mouth is because they want people to "project their feelings onto the character" and "be happy or sad together with Hello Kitty." The other explanation given by Sanrio for being depicted without a visual mouth is that she speaks from the heart; as Sanrio's goodwill ambassador to the world, she isn't bound to any particular language.

One of the most heavily merchandised things on the planet, creating all forms of insane craze in Singapore and Philippines when Hello Kitty dolls were attached to Happy Meals. Strangely enough, her biography states that she was born and raised in London. Then again, the character was originally a British fashion label. At the time of her creation, foreign countries like the UK were trendy in Japan, so her backstory depicted her as a 3rd grade student living outside London.

In Japan, she has merchandising all over the place (usually pink), including Fairytale Wedding Dresses. Think this is a joke? See here

Tropes Exhibited by Hello Kitty Herself: