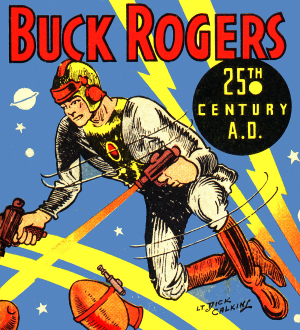 Buck Rogers is an adventure series about a modern man (mining engineer in the 1920s, astronaut in The '70s) who is put in suspended animation, wakes up in the 25th century, and then spends his time as a hero in space.

Has been seen in various media — Pulp Magazine, Comic Book and comic strips, film serials, role-playing games, video games, radio, movie and TV series all stemming from the popular 1928 novel Armageddon 2419 A.D. about a time-travelling mining engineer named Anthony Rogers by Philip Francis Nowlan. John F. Dille, the head of National Newspaper Service, convinced Nowlan to turn his novel into a daily newspaper comic strip (changing the lead character's name to "Buck" in the process) and the rest, as they say, is history.

The series has had a number of adaptations, each with its own spin on the tale. these include:

Parodied by Daffy Duck in Duck Dodgers in the 24½th Century and subsequent sequels.

Trope codifier for Space Opera and Raygun Gothic, along with Flash Gordon and Dan Dare.

This comic-strip provides examples of the following: