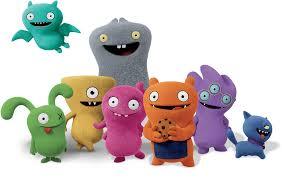 Characters of the Uglydolls film.

A pink female Uglydoll who longs to see "the big world".

A green male one-eyed rabbit Uglydoll and the unofficial mayor of Uglyville.

An orange female bear Uglydoll who likes to bake.

A blue-grey male ghost-like Uglydoll who like to eat things and has endless pockets.

A wise, red male bat Uglydoll who serves as the dolls' voice of reason.

A yellow female Uglydoll with a flat-topped head hence her name.

A lonely bespectacled perfection doll who befriends the Uglydolls.

The bullying leader of the Perfection Institute who despises the Uglydolls and plots to get rid of them.

A trio of perfection dolls who are spies.