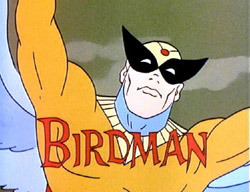 Birdman was the headliner of Birdman and the Galaxy Trio, part of Hanna-Barbera's brief Super Hero cycle in the mid-1960s.
Advertisement:

Birdman is a Winged Humanoid that can fly, shoot solar rays from his fists and project "solar shields" to defend himself against attacks. He was recruited by a top-secret government agency, Inter-Nation Security. Together with his eagle companion, Avenger, They Fight Crime! wherever he is sent by his superior, Falcon-7. Birdman had one weakness: He gradually lost his strength if he is away from direct sunlight for an extended period. The villains often exploited this by capturing Birdman and keeping him in a poorly lit room.

For the supporting segment, see The Galaxy Trio.

Not to be confused with the 2014 Black Comedy film Birdman or (The Unexpected Virtue of Ignorance) or the manga BirdMen.