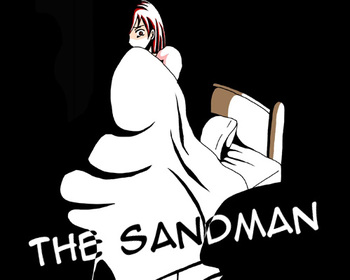 The second installment of Uri's Strange Men Series, set in the same world as The Crooked Man after the game's events. The game is then followed by The Boogie Man and The Hanged Man. Uri also created Paranoiac and Mermaid Swamp.

Sophie Grundler is a model student. Too bad her life isn't quite as lovely as her work. Her father's too busy with work to notice any issues she's been having, like dealing with Regan's constant bullying and her recent struggles with insomnia. For several days now, she hasn't been able to sleep at all.

Still, she quietly endures... until one night, the clock in her room suddenly stops ticking. Sophie learns that everyone in the world has fallen asleep due to the Sandman putting everyone to sleep; it is up to her to stop him and save everyone.

. Please note when it comes to usage of footage from the game, Uri has said videos are allowed, livestreams are allowed, YouTube monetization is allowed, but any other means of profiting off the game are not.

The Sand Man contains examples of: