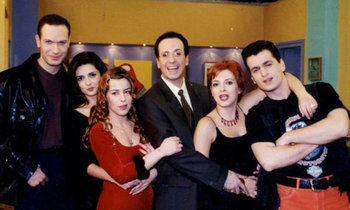 Konstantinou Kai Elenis (literally "...of Constantine and Helen") is a comedy series about the stories of two completely different people trying to live together. Konstantinos is a lecturer of Bysantinology in the University of Athens and Eleni is a waitress in a bar located in Exarcheia. After Konstantinos's uncle dies, he leaves two wills for his neo-classic house in Marousi; one leaving the house to his nephew and another leaving the house to his gardener's daughter, whom he regarded as his family. Unable to determine the time each will was written, the two completely different characters decide to live together and bare with each other's lives and quirks until the law and justice determines which will is valid.

The series ran for two seasons in the period of 1999-2000, in the channel Ant1, with standalone and sometimes two-part episodes. It involves the various stories of the main characters' lives as housemates, usually featuring other characters including Matina, their childhood neighbour with an obsession over marriage, Peggy, Eleni's friend and colleague and aspiring theatre actress, Manthos, Peggy's rich playboy boyfriend and Konstantinos's childhood friend and Nikolas, bartender on the bar that Eleni and Peggy work in.

It is (in)famous for being one of the (if not The) longest re-run domestic series on Greek television, with out-of-order reruns to this day on afternoon hours. It was briefly replaced with tabloid news for a limited period of time in 2012, but was recovered on the program's schedule.