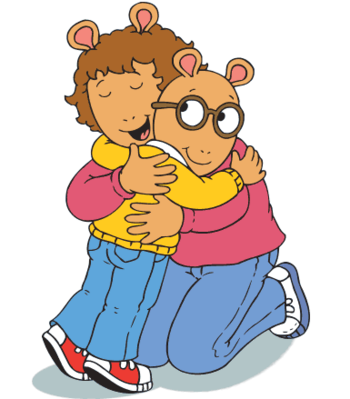 It's a simple message, and it comes from the heart.
Moments like these bring the show back to its baseline.
Advertisement:

Arthur and the Real Mr. Ratburn

Locked in the Library!

Arthur and the True Francine

Arthur vs. the Piano

Arthur and the Crunch Cereal Contest

Sick as a Dog

The Chips are Down

Revenge of the Chip

Mom and Dad Have a Great Big Fight

Prunella Gets It Twice

The Last of Mary Moo Cow

Season 6
Brother, Can You Spare a Clarinet?

Rhyme for Your Life

Is There a Doctor in the House?

Advertisement:
Season 8
Thanks a Lot, Binky

The Secret About Secrets

A Portrait of the Artist as a Young Tibble

D.W. Swims with the Fishes

What's in a Name?

Caught in the Crosswires

Shelter from the Storm

Lend Me Your Ear

Season 21
The Princess Problem
Season 22
Mr. Ratburn and the Special Someone
Season 25
All Grown Up
Specials/Other