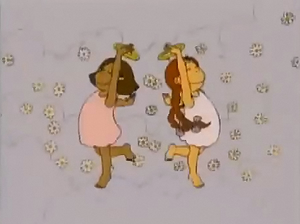 A match made in Heaven
Advertisement:

For a children's show that's constantly being monitored by the Moral Guardians note The infamous "Two Mommies" episode of Postcards from Buster was yanked from the airwaves when parents found out it featured children with lesbian mothers, after all and "Mr. Ratburn and the Special Someone" was banned in Alabama for featuring Mr. Ratburn marrying a guy., it is amazing at the amount of tiny little inklings there are of things that seem to be going on that only astute or older fans can pick up on.