Western Animation / The Rhythm and Roots of Arthur 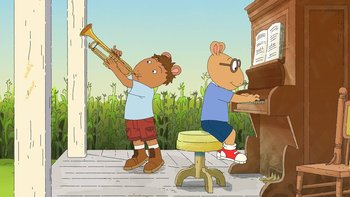 The Rhythm and Roots of Arthur is an Arthur special that aired on PBS Kids on January 20, 2020, and is the fifth special to be created for the show.
Advertisement:

The Reads are going to a family reunion at their great uncle's farm for his birthday, and also bring Buster along. Arthur is excited to see his cousin Ryder after four years, but upon actually meeting him, he discovers that he and Ryder don't have as much in common as he thought. Meanwhile, D.W. continuously runs into a lizard she's scared of, and Buster feels like he doesn't belong at the reunion due to not being a Read.

The Rhythm and Roots of Arthur contains examples of: