Despite of being just a YouTube let's player, AlChestBreach has quite a rich cast of characters with different personalities and behaviors. Because of Al's habit of giving any random NPC a personality, there's Loads and Loads of Characters.

AlChestBreach and his main companions

Al and his companions truly make the show with their hilarious interactions. 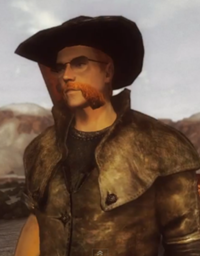 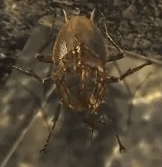 Ready to die for your country, you commie son of a bitch?!
Janet

Janet in her current form.

Janet, a former sexbot and Al's significant other. 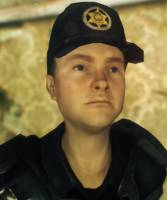 Crier Breach and His Companions

Axe Man! Originally Al's name for his character in DayZ, Axe Man was later brought into the Mojave as a companion. Axe Man!

A cazadore Crier strapped to his arm one day to use as an unarmed weapon.

A securitron painted to fit Santa Claus' color scheme that Crier enlisted in his battle against the rebellion.

With the release of Fallout 4, Al has already started amassing an impressive cast of companions.

A flamingo named Ringo. He's actually a reskin of Dogmeat based on a lawn flamingo prop. 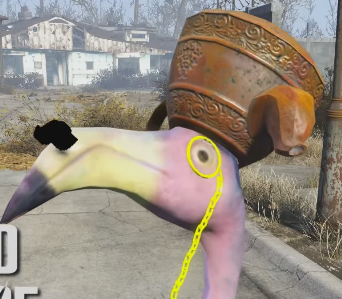 A construction worker model protectron that first appeared in one of Al's streams and captured his and the audience's hearts.

Here are some less important people.

Chumpkins
A cat with a hat that was introduced during an episode of Wasteland Defense. He has numerous high-explosive devices in his body, so he will explode in a chain of mini-nuke explosions when killed.
Gully
A feral Ghoul in a vault security guard uniform, who suffers from random seizures and can barely speak. Memorable quotes include "Waaght?" (what) and "Folooo!" (follow)
Willow
She sings.
The Purr
A mysterious cat themed superhero, and one of Al's many companions. His sidekick is Kitten Boy.
Kitten Boy
A child companion and The Purr's sidekick.
Balls the Talking Dog
A talking dog with intense homicidal tendencies.
Sizzler
A young girl who first appeared in Al's King of the Ring review.

Al's family in The Sims.

Al's other family in the Sims.

The residents of the Clone Vault and clones of Bobby Duggart.