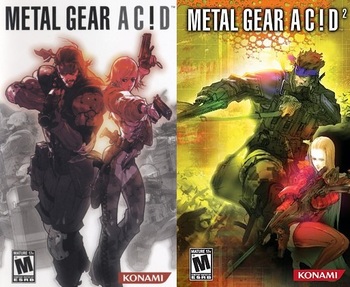 Metal Gear Acid (stylized as METAL GEAR AC!D on the logo) is a Metal Gear spinoff released for the PlayStation Portable in 2004. The first game in the franchise released for the PSP, rather than being a stealth-action game like its console counterparts, ACID (or MGA) is a turn-based strategy game featuring a card-based combat system in which the player's weapons, equipment and abilities are determined by the player's deck. While the story is set in an Alternate Continuity and has no bearing in the main Metal Gear Solid canon, the player's cards feature characters, items and other elements from the first three MGS games (and also from the preceding Metal Gear games), as well as other KCE Japan titles released at the time.

In 2016, a terrorist group has hijacked a plane using a chemical weapon, threatening the lives of its passengers, with U.S. Presidential candidate Viggo Hach among the hostages. The terrorist demand that the U.S. Government hand over the "Pythagoras", a top-secret project developed in the South African country of Moloni. With the Moloni government refusing to cooperate, the US sends FOXHOUND member Solid Snake to infiltrate the Lobito Physics and Chemistry Laboratory in Lobita, where the Pythagoras is being kept. With the help of Teliko Friedman, a member of the FBI's Hostage Rescue Team that was sent to retrieve the Pythagoras, Snake learns about the true nature of the Pythagoras.

A sequel was released in 2005 titled Metal Gear Acid 2 (or METAL GEAR AC!D2), also on PSP, featuring more than twice the amount of cards, cel-shaded graphics, a new Arena Mode, and an add-on for the PSP called the Solid Eye that allows the player to view the game in 3D.

Set sometime after the events of the first Acid, Snake (now a member of a Resistance force) reluctantly agrees to infiltrate a facility located in an island off the coast of North America, owned by a military contractor named SaintLogic Inc. There, he finds out that SaintLogic has been involved in the development of a new Metal Gear tank.