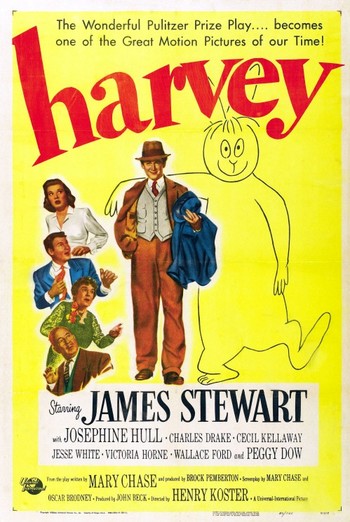 A classic, Pulitzer Prize-winning 1944 play by Mary Chase which has been adapted to the screen several times, including a 1950 film starring Jimmy Stewart and a 1996 Made-for-TV Movie starring Harry Anderson. Jim Parsons has starred in it on stage as well.

Harvey himself is a giant rabbit who is also a Pooka and who is Invisible to Normals. (To those who can see him, he is white.) He is quite friendly. He may or may not have superpowers...

Of course, since Harvey is invisible and usually unobtrusive, his existence is frequently doubted.

His best friend is Elwood P. Dowd, who is the local useless eccentric who is living off his inheritance. He spends his days in bars, drinking and introducing people to Harvey. He wants everyone to meet Harvey, including the local socialites whom his sister wants to impress so her daughter can get married. His attempts to get everyone to meet Harvey tend to disturb the socialites, though.

After one garden party too many is wrecked this way, his sister calls an insane asylum so that she can cure Elwood of seeing and recognizing Harvey. This is made difficult because Elwood is a nice man who charms most of the hospital staff and who doesn't understand that there might be a problem. It also doesn't help that she herself also isn't quite sure whether Harvey is real or not — she just wants Harvey gone.

The questions: Does Harvey exist? Can Elwood be cured of believing in him? And is it worth it?

While the 1950 version is the most popular, five other film or TV versions have been made and a sixth was abandoned in 2009/2010.

"You don't believe that story about the doctor sitting here, talking to a big white rabbit, do ya?"
"Well why not? Harvey was here."