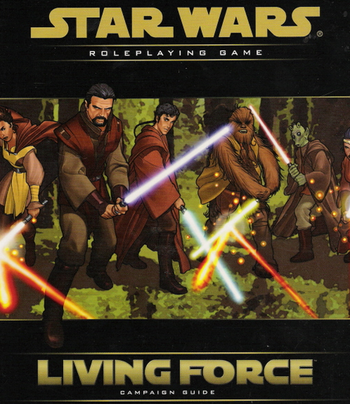 Star Wars Roleplaying Game (informally dubbed Star Wars d20) was the second Tabletop RPG set in the Star Wars universe. It was based on the Wizards of the Coast' trademark d20 System, and was published in 2000, after West End Games (creators of Star Wars d6) lost the license.
Advertisement:

In 2001, it received a shared campaign setting called Living Force, which ran for five "seasons" in nearly five years, taking place during the Prequel Trilogy of the Star Wars saga. The entire system also got "revised" between Episodes II and III, and then received a huge revamp in 2007 (read: post-Revenge of the Sith) with the Saga Edition. In 2010, WotC gave up their license and discontinued all of their Star Wars brand lines, including Star Wars d20. Fantasy Flight Games picked up the license and released Star Wars: Edge of the Empire in 2013.