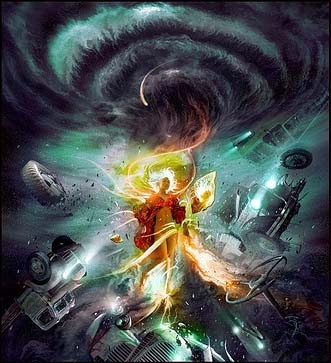 "Martha, does our Hero Insurance cover Reality Warping?"
"If I say so," Martha replied.
"Today's seminar is about a subject near and dear to my heart: Reality Benders. Type Greens. Mary Sues. Bixbies, Shapers, Wizards, Gods, Devils, Outside Observers, call them what you will, these are the guys that change reality based on perception and willpower."
— Transcript of Dr. Clef's Seminar, "Reality Benders and You: How To Survive When Existence Doesn't

So you just finished playing Superpower Lottery? Well, kid, you just won the grand prize! You know those pesky laws of physics? Or that annoying thing called causality? Einstein's theory of relativity? Quantum physics? You can laugh and say, "screw you" to them now.

Reality is officially out to lunch, and you've picked the restaurant, rewritten the menu, and told the waitress, "Actually, it'll be having the salad." This means you can create things out of nothing, change already existing things, erase things from existence, and generally force reality to obey your will just by thinking about it. Any and all scientific or natural laws such as biology, chemistry, physics, or even time, – they no longer apply to you. Yes, for all intents and purposes, a Reality Warper can literally do anything they want. Anything.

The key issue here is how far one can take this. A character with a mild form of this power may be able to fly by negating the effect of gravity on himself. A major case of this may be able to hiccup and accidentally tear the space-time continuum. High-end Reality Warpers tend to be related to the setting itself, such as being one of the sentient cosmic laws. For the really high-end ones, see The Omnipotent.

Running into characters with such powers can be incredibly chancy. Arguing with the more powerful ones may well be futile, especially since they can literally, in the words of Paul from The Dungeonmaster, "reject your reality and substitute their own".

Because absolute power corrupts absolutely, characters with this high a level of power are quite likely to go or be bad. They might even deem themselves to be gods; what's worse, even the only moderately powerful ones are arguably right.

In both modern Speculative Fiction and older folklore, low-to-moderate versions of Reality Warper are standard-issue for magic, since magic by definition uses its own rules, and therefore defies reality. However, there's a difference between all magic being technically like this and characters who can change things just by thinking it without following rules of magic like only being able to use existing spells. The common modern fantasy concept of a granting wishes invokes this premise; *poof* and stuff happens. Cartoon characters also often employ this ability as a gag. Eldritch Abominations are often capable of this, usually to horrible ends. note Some authors however will make Eldritch beings "beyond" reality warpers and even worse than the warpers themselves (if an analogy is given, it may be something like: the warper can rewrite the lawbook, the abomination is the fire that consumes the courthouse). Expect accidentally summoning one of these beings to be an unintended side-effect of warping reality, the abomination will likely go on to be the new antagonist shorty after doing something to the warper.

Protagonists aren't often this character type; what's the point of a story when you can just end it right then and there? If the protagonist is one of these, expect them to either have a reason for not using it or for all of the antagonists to have powers on a similar or greater scale. Also expect initial Power Incontinence resulting from the power not necessarily being limited to his conscious thoughts, and a character arc about the importance of self control.

Writing characters like this can be a challenge, given how easily this ability can turn into a Story-Breaker Power. Nothing can pose much of a physical threat except other reality warpers (although, depending on the extent of their abilities, they may still be vulnerable to threats they aren't aware they need to stop or don't know how to stop). If they are unique then the only solution is Forgot About His Powers or Deus Exit Machina. For the same reasons, reality warpers who are antagonistic towards the protagonists are prone to Just Toying with Them. For a funny way of defeating reality warpers, see Puff of Logic.

Not to be confused with Master of Illusion, as those are only pretending to change or create things (although a reality warper is usually capable of creating illusions, the tropes overlap in that case). Reality warpers often incorporate all varieties of shapeshifting, Winds of Destiny, Change!, Backstory Invader, Space/Time Master, The Power of Creation, retconjuration, and perhaps more for heaps and heaps of Mind Screwing.

Compare Author Powers, Clap Your Hands If You Believe, and Your Mind Makes It Real. Rewriting Reality is a subtrope, often paired with a Tome of Fate or Reality-Writing Book. This trope has nothing to do with I Reject Your Reality, though some Warpers may indeed have that attitude.

When adding examples, please remember that this trope is extremely common (since even magic in general is technically this trope) so please add only egregious examples, and works that elaborate upon this trope In-Universe or have this trope as a Plot Device. After all, Reality Warping Is Not a Toy.