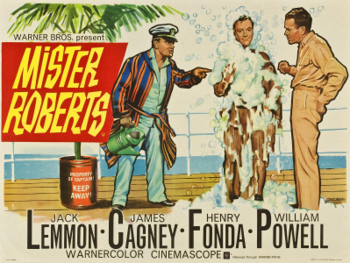 Doc: What is it you want to be, Doug, a hero?
Roberts: Hero? Doc, you haven't heard a word I've said. Look, Doc, the war's way out there, and I'm here. Well, I don't want to be here, I want to be out there. I'm sick and tired of being a lousy spectator.
Advertisement:

Mister Roberts was originally a 1946 novel by Thomas Heggen, about the struggles of Lt. (j.g.) Douglas Roberts, the junior officer aboard a U.S. Navy supply ship that's suffering under the command of a tyrannical captain while servicing "backwater" Pacific bases during World War II. Roberts, who longs to get in on the fighting, is desperate for a transfer to a combat ship, but Captain Morton, who despises him, continually blocks his transfer, while casting about for other petty ways to make the lives of his crew miserable.

Heggen adapted his novel into a 1948 Broadway play, starring Henry Fonda in the title role, which became a Tony Award winner and a long-running production. By 1955 Hollywood took notice and converted the play into a film directed by John Ford and Mervyn LeRoy, starring Fonda as Roberts, Jack Lemmon as the eager Ensign Pulver, James Cagney as Captain Morton, and William Powell (in his final film role) as Doc, Roberts' ally in the long-standing war against Morton.

The novel, play and film provide examples of: