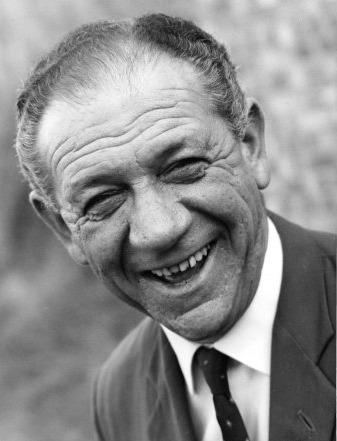 Owner of the dirtiest laugh in British cinema.
"I am not a comedian, I'm a sort of actor who does comedy parts."
Advertisement:

Sidney James, born as Solomon Joel Cohen (8 May 1913 — 26 April 1976) was a South African-born English actor, mostly known for his roles in the Carry On film series playing many antiheroes and LadyKillers. He spent the early years of his life living in Johannesburg and began working as a hairdresser before joining the army during World War II, serving as a lieutenant in an entertainment sector of the army base, soon discovering he wanted to be an actor. When the war finished, he emigrated to Britain to pursue an acting career.

He began appearing in crime dramas and comedy films alongside in the late-1940s, such as The Lavender Hill Mob as a member of Alec Guinness's gang of robbers. He spent the early days trying to get any acting job he could, being spotted as bit characters or extras in films and TV series throughout the beginning of the 1950s. He also turned to radio, appearing in Hancock's Half Hour in '57, alongside Tony Hancock and future Carry On colleagues Kenneth Williams and Hattie Jacques. When that job ended, he appeared in other dramas on the BBC and ITV, this time as main and supporting characters.

In 1960, he was approached by the Carry On producers, originally to replace Ted Ray as one of the lead characters in Carry On Constable, and then became a series regular and appeared in 19 films in the series, gaining popularity with audiences, especially with his characters' Cockney accents, "dirty laugh" and occasional "Cor, blimey!" catchphrase. The production team were rather impressed with James' acting ability, as well as how easy it seemed for him to play any role in any accent (he was praised for his American attempt in Carry On Cowboy).

The popularity in the British media led him into other projects outside of the Carry Ons. James' habit of grabbing whatever role he could get still continued, even though he was getting pay rises and more screen-time, turning him into a workaholic. On top of that, he entered the flashy side of celebrity status, becoming obsessed with gambling, alcohol and smoking, leading to a heart attack in the late-1960s. He tried to cut down on his showbiz lifestyle, drinking alcohol less and smoking a different kind of tobacco.

Unfortunately, there were other problems in James' private life. He had a reputation for being a womanizer, despite marrying three times, and allegedly having several affairs with other women around him. Between his three wives, he had 4 children, but was rumored to have at least three more with several others he'd had one-night stands with. When he thought that he was over it, in his third marriage, he had an affair with a colleague on the Carry On set, which he admitted to immediately stating that he couldn't escape her because of his film roles; his wife forgave him for being honest and said that she would stand by him.

By the 1970s, he was in the Carry On films, on radio, doing stage tours with a comedy theatre group, and was in TV sitcoms, most notably six series of Bless This House. He took a hiatus in the film series with Carry On Dick being his last for the time being so that he could tour in a comedy theatre show that was sold out in theatres around the UK. When the company performed in Sunderland, Tyne-and-Wear; Sid James (in character) walked onto the stage to do his scene with a fellow actress, in which he collapsed in the chair his character was supposed to sit. The company thought he was doing ad-lib, until he didn't respond to the actress' dialogue, to which a stagehand called out to the already-laughing audience "Is There a Doctor in the House?", making them laugh even more.

James was later rushed to hospital, where he died an hour later over a suspected heart attack on stage. Through a busy lifestyle of alcoholism, smoking, womanizing, gambling, and being a workaholic, he managed to die as a well-loved, respected and entertaining actor with a legacy of critically-acclaimed classic British media.