Tropes regarding the Guest Fighters. 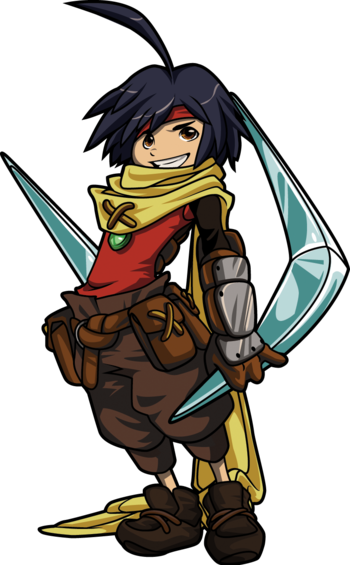 A group of evil knights is terrorizing the countryside? Reize Seatlan is on the scene! This plucky young adventurer travels the land, helping people in need and following his own invented Knight's Vows. But which of these knights are good, and which ones are bad?

Tropes regarding him are here. 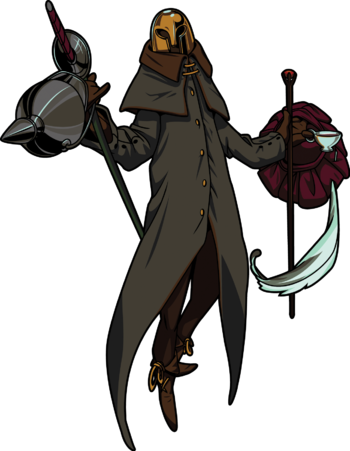 "Ahhh, hats, my greatest passion. Nothing I enjoy more than the crisp snap of a well-tailored brim."

Mr. Hat is obsessed with hats, but for good reason! For although he wears a helmet, each hat that he places atop his head gives him the powers of that hat's owner! Mr. Hat can switch from a charismatic foppish dandy to military genius in a moment, and he takes great pride in his varied fighting styles. Lately, though, there have been rumblings of an even greater warrior who wields a Shovel Blade; one with a wonderfully blue, horned helmet... 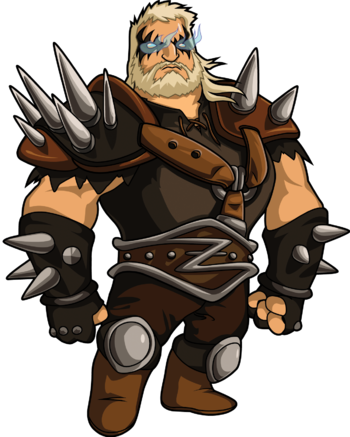 "The Great BAZ KNIGHT! I Like the sound of THAT!"

The storm is coming... With a fearsome rope whip and the toughest-looking armor around, one might think that the traveling warrior Baz would be a shoe-in to join up with the Order of No Quarter. Imagine his surprise when he was rejected! He now roams the land, taking out his anger on passersby. Could he ever prove himself strong enough to earn the title of "Baz Knight"? 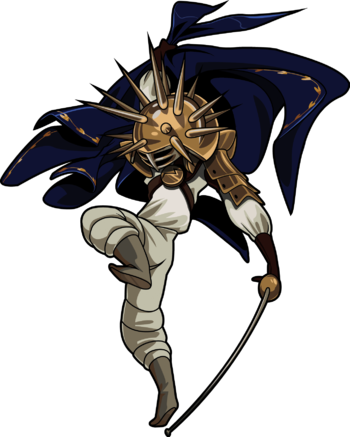 "Power. Honor. The traits of a respectable warrior."

A lone warrior, Phantom Striker appears to those that he deems worthy of challenging him. Light on his feet and wielding a rapier, this enigmatic fighter also controls the power of lightning! Always in search of an honorable battle, Phantom Striker may reward those who fare well against his cyclonic charge. 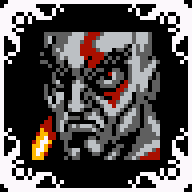 "Prepare yourself for the Spartan wrath of the Blades of Chaos!"

The protagonist of the God of War series whose character and exploits are far too grim to be explained here. For tropes related to him in his home series, see here.

Kratos is a Guest Fighter Bonus Boss fought exclusively in the Sony versions of Shovel of Hope. He'll appear on the map as a wandering encounter once the Curious Map is obtained from the Hall of Champions.
Rash, Zitz, and Pimple

"How about we give you some training, Battletoads style?"

The Battletoads, a group comprised of Rash, Zitz and Pimple, that hail from the series of the same name. For tropes related to them in their home series, see here.

They act as Guest Fighter Bonus Boss, and were initially fought exclusively in the Xbox ONE version of Shovel Knight. They were later added to the Windows 10 version and reached other computer versions in October 2017. They can be found in the Mysterious Area after obtaining the Curious Map from the Hall of Champions. There the player can have a "sparring match" with each one of the Toads, emulating the gameplay of the original Battletoads game.
Madam Meeber 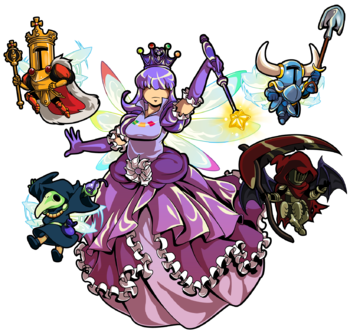 "BOOPITY BOO! What shall we do?"

A character exclusive to the Nintendo versions (Wii U, 3DS, and Switch) of Shovel Knight, who appears throughout all of the campaigns. By scanning a Shovel Knight amiibo, she can summon special fairies based on the payer characters to accompany them on their journey and give them special costumes.