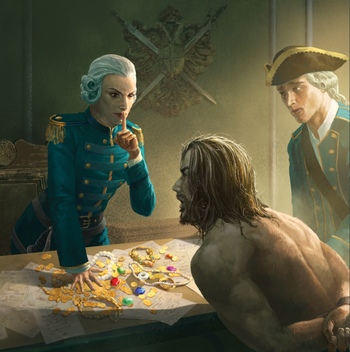 Those we cannot buy, we will bury.

The Pirate Nations are a collection of nations (and in some cases, "nation" is used very loosely) where scoundrels, thieves, rebels, freedom fighters, and villains are quite at home. These nations can only be reached via ship. Most, like the nations of Jaragua, Aragosta, and the Rahuri tribes are located in the Atabean Sea. La Bucca and the Numanari Isles can be found not far from the southern coast of Theah.

The existence of these nations is threatened by the machinations of the villainous Atabean Trading Company- the largest and most powerful merchant cartel on Terra- even more than the Vendel League and the Princes of Vodacce. Any enemies they can't buy off are destroyed with their private army and warships.

Aragosta (The Republic of Pirates

"Without a ship and sail, every island is a prison. Théah’s just one big island." — Vincenzo Gatto 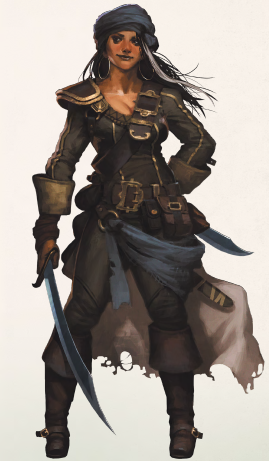 Drink up me hearties, yo ho!

The home of the Brotherhood of the Coast, the nation of Aragosta was founded when the worst pirate to ever exist - Vodacce merchant prince Vincenzo Gatto - lost 7 ships trying to live his dream of being a romantic pirate. His reputation as a floating disaster drove off potential crewmen and he was forced to accept a pardon from the Castillian Navy and retire to the small Atabean island of Aragosta, giving up on his dream. Gatto then decided if he couldn't be a pirate, he would simply surround himself with pirates and live his dream through them. He spent his vast fortune building Porto de Aragosta and opened 5 different bars (which each burned down, fell over, or were destroyed in barfights) to cater specifically to pirates. The final bar was named "Bucket o' Blood" as a joke. And it stayed up.

From the Bucket o' Blood, the first nine captains came together to forge an alliance to resist Castillian and Montaigne pirate hunters. They proved so successful that the island became a haven for smugglers, dissidents, pirates, and generally the lowest-common-denominators of Theah. The budding Republic was solidified by the nine captains when they signed a formal Charter declaring the nation, and Gatto was given an offer to sign the Charter alongside them. He did so, returning to his beachside home as a withered old man, but his dream of being a pirate realized- and he was never seen again...

"In the old world, men are slaves to a fiction, an idea. But when the Company enslaves a Théan criminal or a Rahuri headhunter or an Ifrian prisoner of war, it does so by imposing its will and strength upon that weaker being—a being of such little internal value that it deserves, nay, craves bondage! Thus, I have allowed even these wretches to realize potential beyond their wildest dreams. Moreover, the best among them earn enough money to buy their own freedom. I am the rising tide which lifts them, as well. The best of them thank me for bringing them here and the worst soon become thankful—or else perish in ignorance, to be replaced by someone better and more deserving." ~ President George O'Rourke's Letter to the Shareholders

Nothing personal. It's just good business.

The most powerful merchant cartel to come out of Theah since the Vendel League, a corporation with the power of a nation that answers to no Crown. The Company holds absolute dominion over most of the Atabean Sea after they were disowned by Vendel League for social darwinist business tendencies, then violently expelled from Montaigne when L'empereur discovered their business philosophy also rejects the absolute rule of monarchs. The company was able to recover and bought the long failing sugar and tobacco plantations of Jaragua, using them to go from a small shipping venture to a global superpower in the space of 30 years.

Most of the Company's Thean customers think they are an honest merchant company, charitably resettling Ifrian war refugees on the Atabean islands, shipping sugar and tobacco back to Theah for consumption, all while being harried by pirates and smugglers. Few in the public know the truth- the company has created a civil war in the Ifrian nation of Mbey, is shipping Ifrians (refugees and kidnapping victims alike) and Thean convicts to the Atabean plantations to work until death, and it's powerful enough to go toe-to-toe with Avalon's navy and Montaigne's army in a war. Only in the past few years have the Pirate Nations been able to win victories against the Company to stall their ultimate victory over the Atabean and domination of the few Thean colonies. Time and the actions of Heroes will tell if their luck will hold.

"Gold is not the goal, it is the means to the goal. And that, my friends, is freedom." — Allende 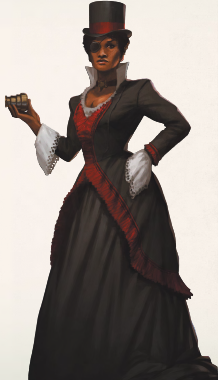 A tiny island off the southern coast of Theah, La Bucca was initially only known for a native pig population, some Syrneth ruins, and an enormous sea creature that would only lurk in the waters around the island. The island's discoverer found that the creature's behavior could be controlled somewhat through a strange device in the ruins. The Castillians soon turned the island into a fortress prison, taking common criminals and political prisoners from all Thean nations.

Recently, a successful prison revolt was able to wrest control of the massive sea creature from the powers-that-be. The prisoners, rather than descending into anarchy and bloodshed, formed Theah's first democracy since the days of old Numa. Now the "Buccaneers" are renowned as privateers, illicit trade, and building a new political awareness at the edge of Thean thought.

"Make no mistake, we are now in greater danger than ever. For now, we have something to lose." — Chaplain Nsōwaa Nkansa

Jaragua is one of the newest nations to be established on the surface of Terra. Long the crown jewel of the Atabean Trading Company, its board of directors rose to wealth and power through mass importation, abuse, and killing of Ifrian slaves. It took eight long years of guerrilla warfare before the slaves drove the company away and freed themselves.

Today the nation struggles for economic and diplomatic stability. Slavery is illegal in Theah and prohibited by the Vaticine Church, but the Sea of Monsters and ATC agents have kept the truth of their abuses from common Theans. The expensive cash crops the Jaraguans worked themselves to death producing could fuel their nation's rise to power and stability, but there is significant (and understandable) resistance to return to farming sugar and molasses. And to make matters worse, the unity of the Jaraguans and Rahuri has been shattered- the island nation has been split in half between the two, dividing the freedom fighters before they can declare victory over the Company. 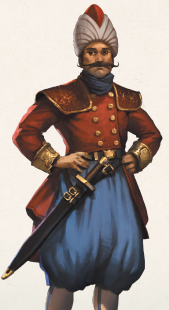 We were great once. Time to be great again.

One of the oldest nations on Terra, the Numanari Isles were the bastion of culture, military and scientific thought before the modern era. Their decline and subjugation to the Crescent Empire and Vodacce has long chafed such a proud and courageous people. They have only recently thrown off the yolk of these outsiders, but their Pride may yet be their downfall as they launched a retaliatory attack on the peaceful province of Sarmion in the Empire. The invasion was repelled with both Numa and Sarmion's innocents suffering heavy losses.

"There are many kinds of people from Montaigne, or that far-off Ussura, or Avalon. You speak with a half a hundred voices aboard one ship. Among ourselves, we may speak with single voices. But to you I say, we are the Rahuri. And we speak for the Sea." — Great Cacique Jibaro

She started hunting Kraken when she wore diapers.

The Rahuri are the original inhabitants of the Atabean Sea. Once, long ago, they were a tribe from the Empire of Aztlan. After the Fall that destroyed the great empire, they were targeted by the survivors as a mass sacrifice to the gods. They fled to the coast and, with nowhere else to go, a great water spirit ferried them to safety in the Atabean. Apocoatl, the Great Feathered Serpent, was unhappy with their escape but the Rahuri bargained with the god. They would hunt and herd the creatures in the Sea of Monsters for the god in exchange for his protection from the mainland. Apocoatl accepted the bargain.

The Rahuri are a people who live their lives along coasts and at sea. Their ability to hunt leviathans and kraken, shaping their bones into weapons and skins into armor, is legendary to the newcomer Theans. To have a single Rahuri aboard a Thean ship significantly raises its chances of crossing the Sea of Monsters intact.