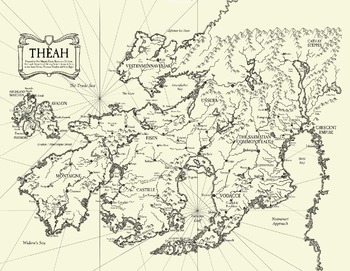 The Glamour Isles (The British Isles)

"In this land, Immortality is a reality. Make yourself a story and you'll live forever." — Jeremiah Berek

The Glamour Isles is a union of three countries: the magical nation of Avalon, the ancient land of Inismore, and the impoverished but proud Highland Marches; recently the magical Sidhe have begun to enter the Glamour Isles more and more, bringing a strange fourth people to the halls of power here. Each has their own monarch and ruling body, but all answer to Queen Elaine of Avalon. 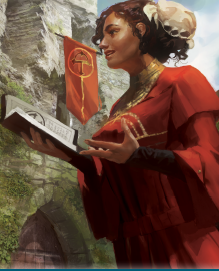 Castille — where you can propose heliocentrism and be made a bishop for it.
"To learn the mind of God, study first His Creation."

Castille is a nation wrapped in religious tradition and scientific progress. The seat of the Vaticine Church, the Third Prophet brought his teachings of hatred toward sorcery to this land, built a seat of power in Vaticine City, and led a religious conquest that established the dominance of the Church after the fall of the Numanari Empire. Its piety and devotion to learning meant Castille stood on the highest peaks of prestige in Théah, which has made its fall all the more tragic.

The disastrous thirty-year-long War of the Cross between the Vaticine and Objectionist churches crippled the army in Eisen, saw their mighty fleet destroyed by Avalon's sea dogs, and nearly cost them everything when the Montaigne invaded. The final blow came with the death of King Salvador — his son, Sandoval, was too young to inherit the throne and his mother had no political capital to have a say governing affairs or overrule the ducados, nor is there currently a Hierophant of the Church to help guide the nation as a spiritual regent. The vaunted Tercios that brought Castille such prestige on the battlefield have deserted after too many broken promises were made to them, and the ducados are too busy fighting over their regional affairs to organize in defense of the old regime. The Vaticine Inquisition now rules the country and is driving it into Dark Age of Learning by burning "heretical" books and imprisoning teachers and foreign religious scholars, with the teenage King Sandoval as their "guest of honor" in Vaticine City. 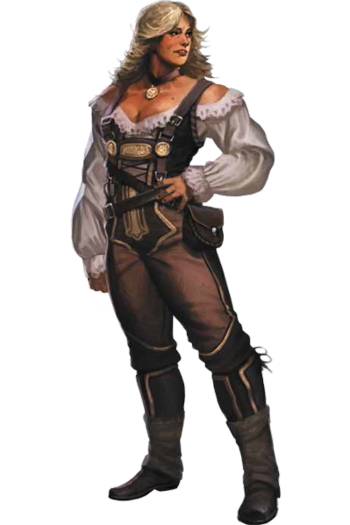 Frau Posen, who may carry Eisen back to unification. She's certainly got the arms to do it.
"The priests keep telling me that the Prophets will bring us all together in the next life. I find this hard to believe, since they've torn us apart in this one."

Eisen's Imperator held its many provinces together for centuries and was feared and respected by all the monarchs of Theah. So long as Eisen was unified, no other Thean Kingdom could match its military, resources, or wealth. Tragically, it was no foreign enemy that ripped this empire apart, but the Eisen themselves. Eisen cities sheltered the Vaticine Objectionists from the Inquisition, which led to Eisen Vaticines attacking and killing their Objectionist neighbors.

Soon the other Théahn nations saw an opportunity to carve up the most powerful empire of Théah and descended on it in force, a pack of vultures and hyenas killing a pride of warring lions. The War of the Cross left every participant shaken. Eisen is now an empty shell — millions are dead, others are starving by inches in its darkened woods, monsters out of folklore leave the countryside and deep, dark places to claim its ruins as their own, and the few safe cities are preoccupied with who will be elected as the next Imperator. 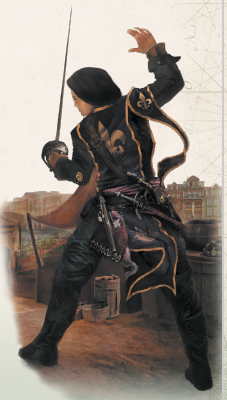 French Jerk? Maybe. But she can still kick your butt with style.
"When the gentry dresses as well as I, then our nation is full, lush, rich and strong. When one sees a merchant do it, it is time for higher taxes." — L'Empereur Leon XIV

The center of art and culture in Théah, the entire continent looks to the court of l'Empereur Leon Alexandre for the latest in dress, manners, gossip, and politics. While the nobility frit away the hours over feasts and dances, the peasants of Montaigne eke ever farther into poverty and starvation to provide the means for the nobles to keep up their lavish lifestyle. They have even been denied the comfort of the Vaticine Church, as l'Empereur will suffer no organization in his nation that will not recognize his supremacy on Terra. Only the vaunted Musketeers, a thousand men and women, work to bridge the gap between the haves and have-nots. In a nation where the army, courts, and government are devoted to keeping them subservient, the peasants can still hope for some measure of justice to come from the Musketeers. And should they fail, the peasants may look to that new invention — the guillotine... 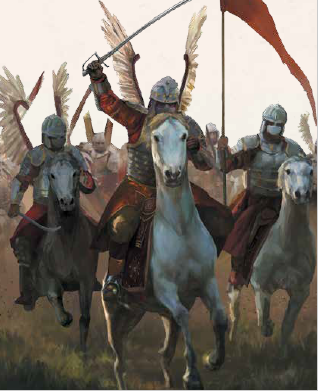 Then the winged hussars arrive!

"All are equal. Even kings."

A combination of the ancient kingdoms of Sarmatia and Curonia, this is also a revolutionary nation in the realms of Théah as the Sarmatian Commonwealth has enacted a new form of government through "Golden Liberty". By proclamation of the King (in response to a political crisis), every man and woman in the Commonwealth has been raised to the rank of Knight and is therefore eligible to vote in the Sarmatian Senate. While nobility in Theah looks to Montaigne for art and culture, Sarmatians are looking to their peasantry for inspiration. Chivalry and gallantry are returning, noble dress is less ostentatious and more practical, and the common folk of both Sarmatia and Curonia now feel that they have a personal stake in the success and failure of their nation.

The Sarmatian Commonwealth was added to the world of Terra in the Second Edition after (per Word of God) the Polish role-playing game community continued to support the 7th Sea game line even after its heyday had passed in the United States, but they lamented a lack of a Polish-analogue nation. 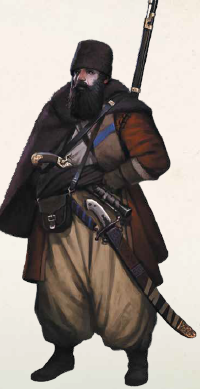 In Czarist Ussura, Matyushka protects YOU!
"You share the warmth or die from the cold." — Ussuran Proverb

The largest nation in Théah by far, to outsiders the nation of Ussura is a foreboding wasteland of high mountains, dark forests, and deadly tundra. And they are absolutely correct in these assumptions. To Ussurans blessed by the touch of Matyushka, the land is everything they need it to be — nothing more and nothing less. The goddess ensures that her people are warm enough, fed enough, and sheltered enough to survive the brutality of their winters. Invaders find no wild game, no shelter, and deathly cold that cuts to the bone when they cross into her realm.

Long a tributary kingdom to the Khazars of the Iron Horde, Ussura is now an absolute monarchy ruled by a Tsar or Tsarina with the assistance of a council of Boyar nobility. It may be the largest of the Thean nations, but it is also the least developed. Ussuran peasants and nobility still live in what could be described as "medieval" conditions, and this gap in development compared to the rest of Theah is not sitting well with some Boyars. A succession crisis has forced them to the brink of civil war, with one side favoring reliance on the Old Ways and Matyushka's protection, while the other points out that Matyushka could not protect them from the Iron Horde and may not be enough to protect them from another great power... 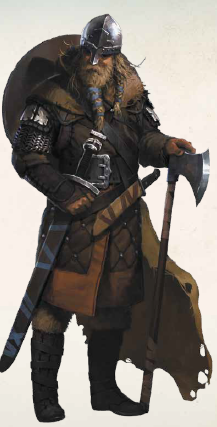 We come from the land of the ice and snow!
"Two hundred years ago, they raided and pillaged without mercy. The only thing that's changed? They pounded their swords into coins."

Long ago, the Vestenmannavnjar were the terror of Théah. From Avalon to Ussura to Eisen and Montaigne, their longships prowled the coasts while their warriors engaged in casual Rape, Pillage, and Burn behavior. Then, almost 200 years ago, the plunder ran out and the noble lords couldn't afford to pay their warriors on these expeditions. Meanwhile the merchant classes were being harried by pirates across the seas. The three factions — nobility, warriors, and merchants — struck a deal that had a profound effect on Théah for generations to come, forming a confederation of merchant guilds known as the Vendel League. The Nobility provided land, the warriors gave security, and the merchants moved product across the known world.

Now, the Vendel League is Vestenmannavnjar. The Jennies, Miners, Carpenters, Brewers, Sailors, Moneylenders, and Blacksmiths of the League have formed an organization that is rivaled only by the Trade Princes of Vodacce and their wayward proteges that formed the Atabean Trading Company. 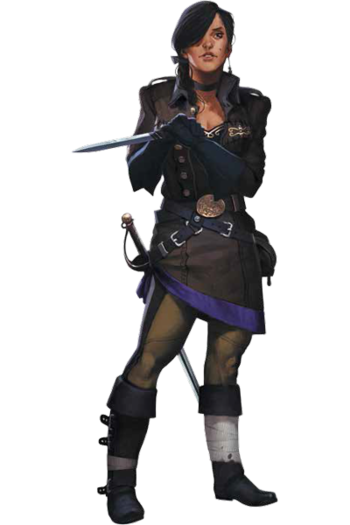 Go ahead. Tell her to stay in the kitchen.
"If asked to describe Vodacce with a single word, I would respond: 'Treacherous.'"

An ancient seat of the Numanari Empire, Vodacce stands as a remnant of its glory days. The capital has long been deserted since the Empire's fall, but its legacy of wealth, sorcery, and politcs lives on in the Seven Princes. Each can claim lineage to the great families of old, and each has designs on reunifying Vodacce under their family with the wealth of their trade fleets and personal mercantile empires. In many centuries, none has been good enough at The Great Game to outdo his rivals.

And it is always his rivals. Vodacce women are in possession of the most powerful sorcery known to Théans — that of Strega — bending fate itself to empower or doom anyone they choose. The princes have held an ancient compact that keeps women from using this power to usurp them or ever holding any political power. No Fate Witch may learn to read, write, or count. Every woman is tested for potential as a witch — those who show the gift are quickly secluded and traded as bargaining chips by their noble family. Those who do not go on to become common laborers or perhaps (if they show enough aptitude in wit, entertainment, and love) rise through the ranks of society as Courtesans.