Main Character Index | Main Characters (Himura Kenshin) | Supporting Characters | Rivals and Minor Villains | The Meiji Government | Oniwabanshu | The Ten Swords / Juppongatana | The Six Comrades | Anime Only Characters | Manga Only Characters
open/close all folders
Advertisement:
The Meiji Government
With the successful revolution by the Ishin Shishi, a new government was formed, promising to bring Japan into the modern era. They try to rule fairly and justly but the actions they took to get to where they are continue to find ways to compromise them as they struggle to maintain order in the face of the new world.

Yamagata Aritomo is the general of the Meiji Imperial Army, one of Kenshin's comrades during the revolution, and the first major player in the Meiji Government encountered in the series. He sought out Kenshin so that he could reunite with his fellow comrades as a high-ranking officer, but Kenshin declined, wanting to protect the people around him as a wandering swordsman instead. While disappointed, Yamagata respects Kenshin's choice and does not pursue him any further. The two continue to cross paths every so often and aid each other in any way possible.

Ōkubo Toshimichi was one of the head samurai of the Ishin Shishi, and after the war ended he became head of the Department of Internal Affairs in the Meiji Government. The war is long over but it's taken its toll on Lord Ōkubo who finds their attempts at keeping the peace and building a nation far harder than destroying the old one. When Shishio reemerges he goes to his old comrade Kenshin for help defeating him but is ultimately assassinated by Sojiro. His death is what motivates Kenshin to step up and take down Shishio's new empire.

The Home-Minister succeeding Okubo both in the live-action films and in real life. Ito is decidedly less of an upstanding individual than Okubo and is implied to be behind many of the government's shadier moments. When Shishio brings out the Purgatory he puts pressure on Ito to capture and execute Kenshin. Ito reluctantly complies but it's clear that he's scheming.

A military commander who fought during the wars. He was responsible for the destruction of the Sekiho Army as the Ishin Shishi was maneuvered into a difficult position with promises they couldn't keep, so Captain Sagara and the Sekiho were blamed and executed. After the war ended Shindo was given a job in the government but he resents the position and feels that his contributions were overlooked. He orders a number of False Flag Operations pulled by thugs disguised as the Sekiho in order to steal money for him and to further soil their name.

Another former Ishin Shishi samurai was given a government job in the Meiji Era. Shibumi had a bad case of both ruthlessness and ambition and sought to climb the ranks of the government by assassinating fellow politicians. He was behind Kurogasa and later hires Akamatsu and Saito to perform a hit on Kenshin.

Yet another former Ishin Shishi samurai was given a government job in the Meiji Era, specifically as part of the Army Ministry. When he becomes a target for Kurogasa, Chief Uramura asks Kenshin and Sanosuke to protect him. He later shows up in the Jinchu arc, aiding his nephew Fudosawa in taking over a local village.

The local chief of police, Uramura (or Muriaki) first appears during a raid on Kaoru's dojo looking for Kenshin at the behest of Yamagata Aritomo. After that, the chief occasionally approaches Kenshin and the gang for help on various cases. 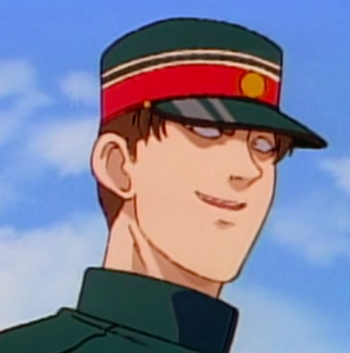 The captain of the Sword Bearing Police. Ujiki abuses the power afforded to him by his ability to carry a sword in the no-swords era of the Meiji by bullying various unarmed villagers and assaulting other non-sword-carrying police officers.

The Police Chief of Kyoto falls under Saitou's command when he finally arrives in the city. He's the one who sends out his men to stop the burning of Kyoto.