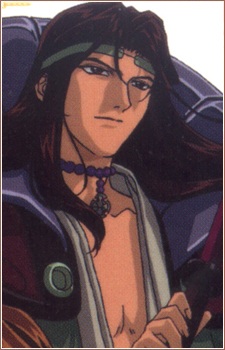 A Christian, and sought revenge for Christianity, and to make the Holy Land, after his parents were killed for their beliefs when Christians were persecuted during the Shogunate. He mastered "God Speed" by the age of 14, and according to Kenshin, had surpassed even God Speed. His followers believe that he is the "Son of God". Some of his "miracles" were really just due to his education in Western Medicine, and other sciences. 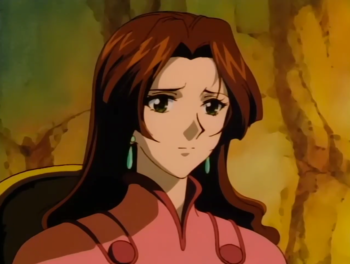 Shougo Amakusa's younger sister. She serves as a holy mother to their crowd of followers and a teacher to the young children. She has suffered from consumption ever since she was a child (which she most likely obtained from her and Shougo's dead mother, who suffered the same illness). She is often seen accompanied by Shozo, a childhood friend whom she and her brother saved from persecution.

A supposed faith healer who says his prayers can heal the sick and injured. He actually worked with the Hishimanji gang to bring ruin to the doctors as a con artist. 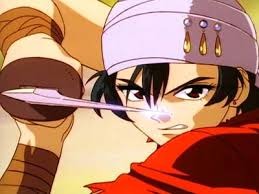 The leader of the Kairyu pirates, who raid ships containing valuable goods that they can sell off to feed the poor.

A Chinese young man who was taken in by Shougo and Sayo's group after being bullied and beaten up by his Christian beliefs. Due to this he holds Undying Loyalty for both of them and acts as Magdaria's bodyguard, eventually seeing Sanosuke as his Worthy Opponent.

Advertisement:
Elsten
Voiced by: Ryūji Nakagi (JP), Tom Wyner (EN)
A Dutch medic who is the ambassador of the Netherlands in Japan, and Kenshin has him in high regards.
Gentatsu Takatsuki
Voiced by: Nozomu Sasaki (JP); Boon Sheridan (EN)

A young samurai/assassin of the Aizu clan whom we meet in the Ishinshishi e no Requiem movie.

One of the leading warriors of the Aizu clan, he was Gentatsu's best friend. He also subsequently befriends Kenshin in the modern age. He is also the leader of a rebellion that aims to overthrow the Meiji government.

Shigure's ward and a local school teacher, as well as Gentatsu's younger sister.

A teenage boy who works for Shigure and quickly makes friends with Yahiko. He dies in the middle of Shigure's rebellion.

A survivor of the Aizu clan and an associate of Shigure and Gentatsu. He is the second-in-command of Shigure's rebel army and handles its day-to-day affairs.

A captain in the Tokyo police.