The four members of Aoshi's squad serving Kanryu Takeda. They all follow Aoshi with loyal devotion. The members are Hannya the spy, Beshimi, Hyottoko and Shikijo. After being defeated by our heroes, they all die performing a heroic sacrifice to save Aoshi from Kanryuu's gatling gun. Their heads are buried near a dark wood by Aoshi himself.

A masked warrior and Aoshi's most trusted henchman. A noble and honorable man in spite of his monstrous appearance. 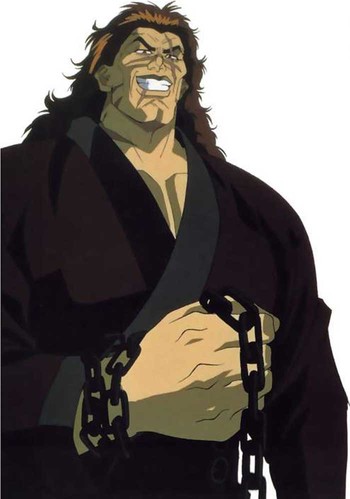 The most physically strong member of the Oniwaba Group. He isn't present for any of the attacks on the Dojo, but serves as a guard at Kanryu's mansion. Powerful, boisterous, and covered in scars, Shikijō is a formidable foe.

A massive man capable of breathing fire. After Beshimi's failure Hyottoko takes the fight straight to the dojo.

The first of the Oniwaba group to debut. Beshimi is a small but fast man who fights by flicking darts. Some darts are coated in poison and can lead to a prolonged hospital stay.

The other branch of Oniwabanshu. Unlike the Tokyo branch that broke off with Aoshi, the Kyoto group settled down to all run an inn together. In spite of this they're still a formidable ninja group ready to come back into action should the need arise.