Hiruma Gohei and Hiruma Kihei
The first villains in the series. In the manga, Hiruma Kihei wanted to sell the land that the Kamiya dojo sits on. To do so, he wormed his way into becoming Kaoru's caretaker while using his brother Gohei to aid him in his goals. In the anime, Gohei is a Composite Character of the two and is instead a bitter ex-student of Kaoru's father who wanted revenge. Regardless of the motivation, Gohei impersonates the legendary Hitokiri Battousai while claiming to use the swordsmanship of Kamiya Kasshin Ryu to stain Kaoru's family name. He might have actually slain Kaoru and taken her home as Hitokiri Battousai if the real deal himself didn't blunder into Tokyo on that misty afternoon...
Kurogasa/Udo Jin-e 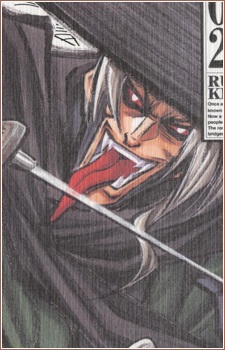 A hitokiri during the Revolution, and there is evidence he continued killing people well after the end of the Revolution. A master of the Nikaidō Heihō technique, attacked high-ranking Imperialist officials of the Meiji government (leading some to believe he fought for the Tokugawa shogunate during the war, since he did state that he was a member of the Shinsengumi, though his thirst for blood led him to killing members of his own squad), killing anyone who stood in his way. 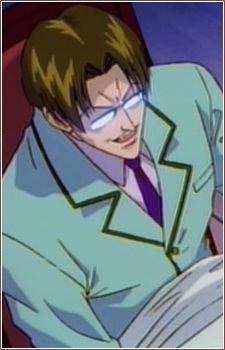 A cunning money-minded industrialist and opium dealer. He hired Shinomori Aoshi and his Oniwanbanshu, as well as numerous lesser warriors, as personal bodyguards and hitmen. 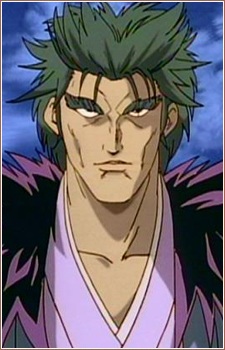 The leader and founder of the Shinko-ryū "school" of kenjutsu - an organization whose purpose is to revitalize Japanese kenjutsu through force.

Arundo Akamatsu
An arrogant and overly-confident warrior sent to kill Kenshin along with Saitou, but fails. Wields a kusarigama and hidden chains.

Saito Hajime (aka Fujita Goro)
See Rurouni Kenshin Main Characters
Abukuma's Four Priests
Four warrior priests serving under Shishio Makoto, who're sent to hire Aoshi Shinomori when he visits the tombs of his fallen comrades, but are eventually provoked by Aoshi and killed.
Senkaku
One of Shishio's henchmen, but not a member of the Ten Swords. Is a huge man with an oddly shaped head who boasts about his speed and the 99 men he murdered. He rules over the Shingetsu village with an iron fist. Is defeated by Kenshin who uses his own speed against him and arrested.
Yaminobu
A group of five ninja-like warriors from the Bakumatsu period, they tried to kill Battosai Himura hiring Tomoe so that she could become a bait for Kenshin, and were also in cahoots with Iizuka. They were all killed by Kenshin, except for Yatsume Mumyoi. Most of their members have something to do with the Six Comrades in the present, as Tatsumi was Inui's master and Nakajo was Otowa's buddy. For Yatsume Mumyoi, see The Six Comrades.