You can trust her.
Umbria/Zaedalkaah
"I'm as innocent as a child with a fresh, delicious heart."

Umbria/Zaedalkaah is a secondary antagonist in the comic. She has had quite a bit of screen time, and has had many adventures on her quest to get her old body (and character classes?) back. Her quest is basically the B Plot of the entire comic. 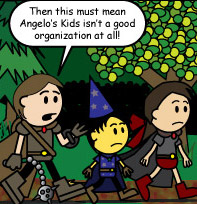 Not too bright...
Jason Moriatos
"Now that I think about it, a 3 vs 5 fight wasn't too smart anyway."

Jason is a barbarian who was part of a three-person team of bandits who attacked Julie's group. They lost, and Jane was killed (though not by Julie's group). Umbria watched over them and joined the group. Jason seems to be attracted to Umbria and is fairly easily bent to her will. 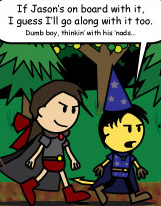 Trevoricus
"Confuse a little human girl for a halfling ONCE and they never let it go!"

Trevoricus is another part of Jane's team, before it was hijacked by Umbria. Trevoricus is a gnome wizard who is unliked by the law due to some unfortunate mistakes and indescretions he had with a young female human child. He is also the brains of the group, though he too passively follows Umbria's selfish and crazy schemes. 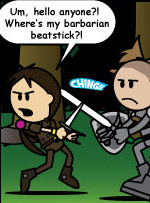 Jane
"You can't fight us with all that crap on your back!"

Jane was the former leader of a small adventuring group that waylaid Julie's group. They tried to bluff Julie that some treasure Julie's group found earlier was theirs. The bluff failed and they fought Julie's group for the swag instead, but that also failed. Julie's group spared the trio, but Jane was killed by Umbria/Zaedalkaah while Jason and Trevoricus were unconcious in order to usurp Jane's position in the group. However, recently she has come back as a ghost and appeared before Trevoricus. The two work together to defeat Umbria and kick her out of the group, so Jane can take her spot as leader back. 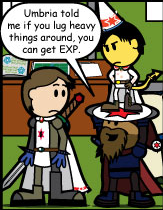 Kergak Slamslicer
"I got no clue, yo. This ain't my call, so don't take it personal."

A dwarven fighter and soldier of the Souballan Empire, put under Umbria's command along with several other Mooks. In a hard-fought battle with some elves from Silverfronds, he was the only survivor among them, and proved to be fairly effective. He's stuck with Umbria and co. since.