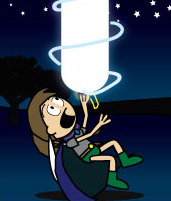 Julie is the protagonist of the story. The story begins with Julie working as a waitress for a bar in Huckleton called "The Wayside". Then one night, she gets a prophetic dream from a powerful shrouded figure she affectionately calls "The Palm Tree Ghost". The figure explains to her that she will save the world by getting the pendant and collecting the broken magicant pieces. How she will save the world with them will probably have to do with battling the Souballo Empire and using the Magicant's power to fix other problems. 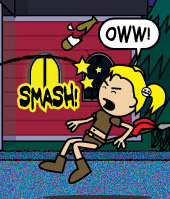 Angelika Magilligan
"I just USE the spells. I don't know anything about them!"

Angelika is Julie's fifteen-year-old sister. She bumps into Julie right after Julie quits her job at the bar and decides to join up with the quest. Angelika doesn't seem to care too much about Julie's mission and is only in it for the gold and to help keep her big sister safe. Angelika is very different from her sister, in both personality and the skills she uses. 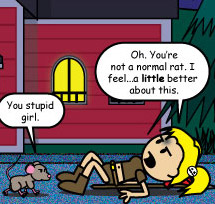 Outsmarted by a rodent.
Norveg
"You'll never get very far if you behave like a simpleton and never listen to reason."

Norveg is Angelika's new rat familiar. Despite numerous references, no-one will tell him what happened to her previous familiar. The rat and the blonde girl met in huckleton and have decided to travel together since then. 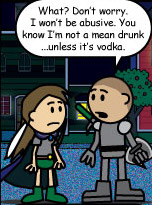 Lenny Magilligan
"It figures some random bad guy knows more about this quest than we do..."

Lenny is Julie's husband, and for those who don't know, he took her last name. He has been dragged into the adventure by his idealistic but silly wife, but he doesn't mind too much. He originally worked as a mercenary and met Julie when hired to guard her carriage. The two fell in love and eventually wed, though details on their story are still fuzzy. In the group, he is a fighter and is the group's meat shield and skullbasher now. 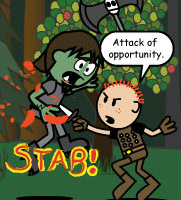 Rocky's a sullen, unpleasant red haired teenage boy. He is also the group's rogue, specializing in picking the locks, disarming the traps, and shanking dumbass opponents from behind. Originally he worked for his father's flower shop, but got into trouble with the law over his flower selling techniques. While on the road somewhere along the line he met Angelika. The two decided to work together conning people out of their money and shiny possessions. While on their travels they met Julie and Lenny right outside of The Wayside, and now the four work together. Rocky may or may not regret this decision. 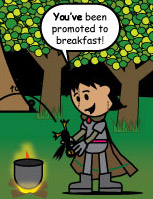 Pauline is a barbarian, a melee fighter that relies on rage, passion and two-handed weapons to win battles. The group met her in a small town on their way from Huckleton to Everwood, after defeating her underlings in a bar fight. They also defeated her in combat the next day and she decided to join them on their quest. Pauline may be a girl but she's practically one of the guys and has some pretty nasty hygiene problems to boot. 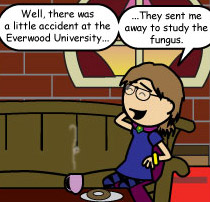 Emily Wellis
"Fortunately I learned how to make magic arms and armor that DON'T scream obscenities at their wielders."

Emily is a pleasant (appearing) but reserved wizard who has joined the group when they were in Llanadario. Emily was a magic student from Everwood, but is now on the road to learn about magic and document various different types of fungus. 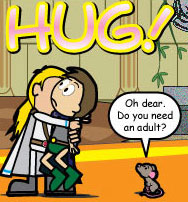 Loves giving hugs.
Jordie Kent
"I'm supposed to go with you on your journey!"

Jordie Kent is a Cleric who found Julie via divination magic. Apparently it is destiny that bound him to her, though Julie and the others seem a bit skeptical about it. Julie met him in Autumnson while she was at a temple gathering info on an Erinyes that attacked her. It was originally after Jordie, apparently.