open/close all folders
Legendary Heroes
There are twelve legendary heroes. They are featured prominently in the game's backstory, and they tend to have higher stats than other heroes. 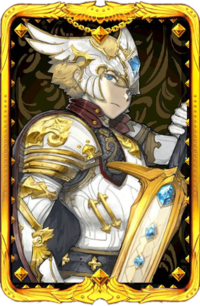 The first legendary hero acquired in the game, Leon was one of six unique heroes who aided the Goddesses in their fight against the Apostles. The six heroes died during the war, but a prophecy stated that the heroes would be resurrected in the future. 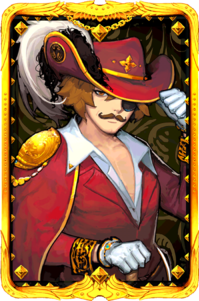 A former fencing instructor, now a Tristan admiral, Rochefort is a laid-back, smug, and colorful character. He accompanies Roland of Honor on the latter's quest to track down the Black Sister, Melissa. 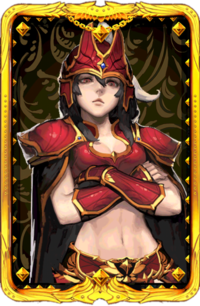 A demon hunter, Kriemhild is experienced in combat. However, she was cursed by a demon to sleep forever. Her lover, Siegfried, saved her by taking her curse for himself. Kriemhild defended Siegfried from nearby demons until a Goddess made her an offer. The Goddess would help wake up Siegfried, and Kriemhild would help the former to save the world. Kriemhild decided to accept in order to help Siegfried. 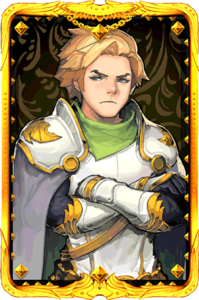 A former orphan, Roland became a paladin and the bodyguard to the Saintess Maria. He currently hunts the Black Sister, Melissa, and he is fully committed to his duty, which puts him at odds with Victor Rochefort. 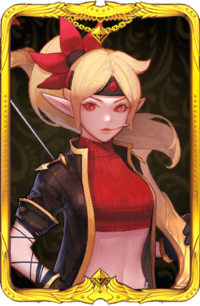 A member of the Silver Elf clan, Sigruna was born into the elves' lowest caste. She decided to join the King's Elite Guard to support her family. When demons attacked her clan, Sigruna shot them all down by herself, and a Goddess asked her to help save the world. 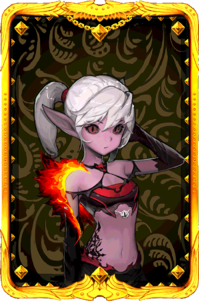 The former host of a demon, Demona gathered a community of demons and led them to a land of safety. She fights to defend her people from the Order of the Goddesses. She is a close friend of the Black Sister, Melissa.

D'Artagnan of Iron Will 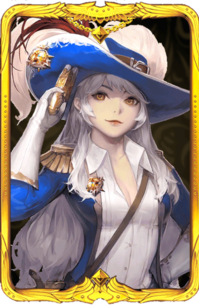 The heroine of the Western Country, D'Artagnan is a skilled sheriff who is popular throughout the land.

A former street dweller, Teresa became a soldier to escape the slums. She befriended Melissa, and she was enraged when she heard a rumor that Melissa was murdered by a demon. To hunt Melissa's killer, Teresa joined the Night Witches alongside Magical Girl Cano.

Dorothy is a witch with a passion for magic and a desire for knowledge. After mastering four elements of magic, she learned about forbidden dark magic and was cast out by her peers. A Goddess gave Dorothy a mission to use her powers to help others.

A famous pop-star, Cano uses the love of her fans to fire magic beams at enemies.

Once an ordinary village girl, Maria became the fourth Saintess in recorded history. Lednas was formerly her bodyguard.

Originally an ordinary sister of the Order of the Goddesses, Melissa discovered the ability to use the power of the black spirit. After speaking with Demona the Red Lotus, the two decided to create the Black Order to combat the Order of the Goddesses' secret agenda.
Warriors
Warriors are frontline units with high defense, but low resistance. Most warriors specialize in bursting down enemies with physical damage. 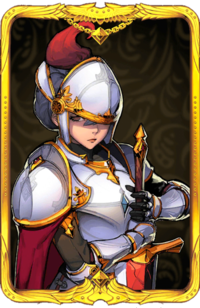 A girl who became a knight to avenge the death of her parents. She currently serves Emperor Alexander.

An ordinary warrior, Susanno became a rather famous lord after killing a snake monster.

A member of the royal devil family, her father kicked her out of the house for being lazy. She started a war to blow off steam, and she somehow became the Absolute Devil in the process.

Created by Rapture Science and supported by the data of thousands of Mass Produced Montes, Monte Cristo was given a mission to destroy the android known as R-0.

An international student from the Eastern Kingdom, Kaori became the head of the kendo club. Currently, she is looking for move people to join the kendo club. She is the sister of Hawk Eye Hikari.

The prince of a throne, Abel's soul was stolen by his opponents, including his brother, Cain. He decided to dedicate his efforts to exterminating demons to track down Cain and his missing soul. An attempt to fight Cain ended poorly for both brothers, and Abel still pursues Cain to this day.

Uzimant was one a young warrior from the Wolf Tribe who fell in love with the princess of the Frost Elves. They became married when Uzimant became the king of his clan, but the princess was murdered shortly after. Driven by rage, Uzimant declared war against the Frost Elves.

The son of a wealthy magistrate, Sworden's father abandoned his wife and son. After becoming a magistrate himself, Sworden swore not to become corrupt like his father.

Victoria of the Oath

Paladins
Paladins are support units who defend allied heroes. They have high resistance, but low defense. 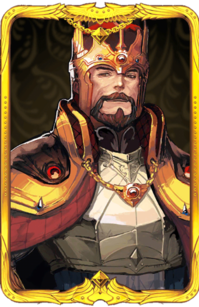 Alexander was a man who vowed to cross the land and see the legendary sea. After many years of consolidating his power, he embarks on his expedition, only to find that the legendary sea wasn't all that legendary or awe-inspiring after all. However, he did manage to become emperor in the process. 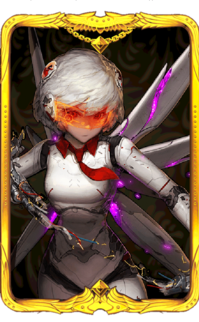 V was created as a placement for R-0 when the latter disappeared. When her creators deemed her to be an unsuitable replacement, they instead reprogrammed her to track down her predecessor. However, V was severely damaged upon confronting R-0, provoking her into a state of violent rage. Now V relentlessly pursues R-0 in order to eliminate her, and nothing yet has managed to stop her.

Athena the Saintess of the Battlefield

Dullahan of the Apocalypse

Captain of the Gatcha Rangers

Archers
Archers are ranged units who specialize in attacking the back line. They have a balance between defense and resistance.

Hunters
Hunters are ranged units who deal damage to front-line enemies. They have moderate defense and low resistance.

A skilled monster hunter, Crow became infamous for his brutal methods. Even after he decided to use more humane methods, this reputation remained. Eventually, Crow decided to keep the bodies of dead monsters in a coffin that he carries on his shoulders. Now, everyone is completely terrified of Crow and his reputation.

Wizards
Wizards are support units who can clear out groups of enemies with powerful magical attacks. To balance this, they also have low HP and defense, but high resistance.

Demeter in the Golden Wheat Field

Priests
Priests are support units who heal allies in battle.

Aria of the Stars

Goddesses
There are currently eight goddesses in Crusaders Quest, each with a special ability that can be used in combat.

Prestina, Goddess of the Forest

Anut, Goddess of the Desert

Aubrey, Goddess of the Sea

Bella, Goddess of the Volcano

Villagers
There are several characters that provide helpful in-game services to players.

Champions
Champions are special support units that can be unlocked by sending away an extra 6-star hero.

Apostles
The main villains of the game, the Apostles fought a war against the Goddesses, but they lost. Now, they are returning, and new heroes are needed to save the world from their presence.